Major firms to get suicide prevention training thanks to regional daily

Suicide prevention training is set to be introduced by a number of major employers thanks to a regional daily’s campaign.

South Cumbria daily The Mail launched its ‘Time to Talk’ campaign after five young men from its patch were believed to have taken their own lives in the first few months of 2019.

As well as helping people understand when someone is at risk of suicide, the new initiative will see suicide prevention training delivered to organisations who choose sign up – and it is understood a number of businesses in the Barrow-in-Furness area have backed the initiative. 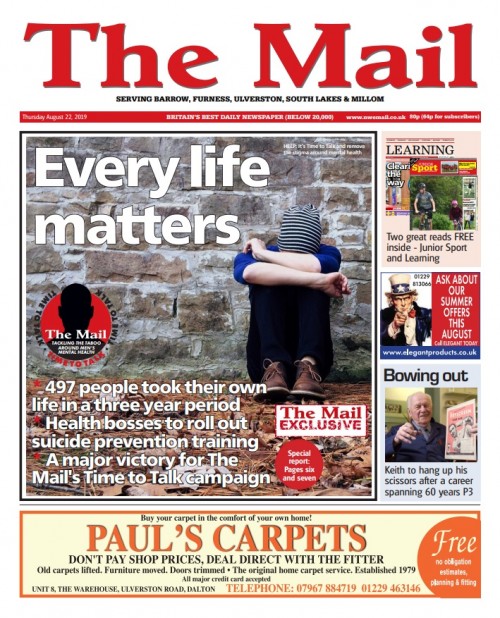 It comes after it was revealed that 497 people within the Lancashire and South Cumbria area took their own lives between 2015 and 2017 – giving the region England’s third highest rate of suicide.

The campaign victory provided a splash for The Mail yesterday, pictured above.

Vanessa Sims, editor of The Mail, said: “If we can prevent just one person from feeling so desperate they believe they have no option but to take their own life then our campaign would be worthwhile.

“Here at The Mail we saw the worrying increase in suicide rates and realised we needed to act. We are so pleased that health bosses have listened to our call for action.

“We now hope that more people realise that every life matters.”

Michael Cassells, community worker at mental health organisation Mind in Furness, added: “I would like to thank The Mail for its support on this important issue and I would like the paper to continue to play its part in raising awareness about suicide prevention.

“Mind in Furness is pleased to be part of Suicide Safer Barrow and I would like to continue to stress the importance of making suicide prevention a priority and in addressing the underlying issues that cause people to take their own lives.”