HTFP reported last year how Simon Hacker and Matthew Bigwood founded the Wotton Times to serve the Gloucestershire town of Wotton-under-Edge, despite being told they would be “mad” to do so.

However, Matt’s “ongoing health problems” have now led to the title’s suspension – although the pair are in talks with “interested parties” over its future.

News of the title’s suspension was revealed in a statement published by Simon on the Times’s Facebook page on Monday. 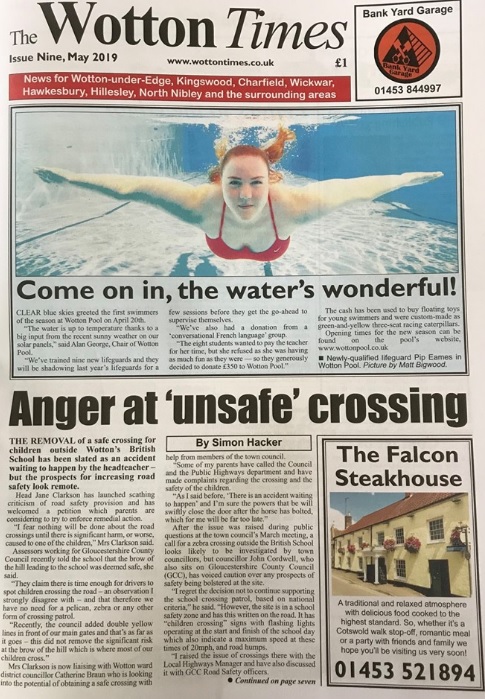 He said: “Please note that, due to health reasons, further publication of The Wotton Times newspaper has been suspended. We thank all of our supportive readers and loyal advertisers who helped this new publication go from zero in April 2018 to become such an appreciated and celebrated source of local news and views.

“It has been a venture which was in profit from day one and which has undermined a nationwide belief that paid-for local newspapers have no future.

“The message is clear from this point that a real paper embedded in the community it serves will always be needed. Should any interested parties wish to discuss viable potential plans for the future of the newspaper, please contact us.”

The duo worked together in the 1980s and 1990s at the family-owned Bailey Newspaper Group in nearby Dursley, before Simon moved to freelance for national papers and magazines, while Matt built a career as a professional photographer and videographer.

The paid-for Times had been published monthly since last April, with Simon serving as editor and Matthew as publisher.

Simon told HTFP: “Due to ongoing health problems for Matt, who is the publisher and in practical terms the production half of the paper, we have suspended the print edition.

“Our Facebook platform continues and has strong support. It appears possible there will be public order issues in the community if the paper does not survive.

“We are however having talks with some interested parties who want to see the paper’s ongoing growth and success.”