A local democracy reporter has won a travel writing award as a result of attending his first ever press trip.

Carl Jackson, who works for the Birmingham Mail and Birmingham Live under the BBC-funded scheme, was honoured at the Visit USA UK Media Awards last week.

Carl, pictured below, triumphed in the Regional Newspaper Feature category for his piece on ‘Canyon Country’ in the south-west of the US.

He told HTFP his victory felt “a little surreal.” 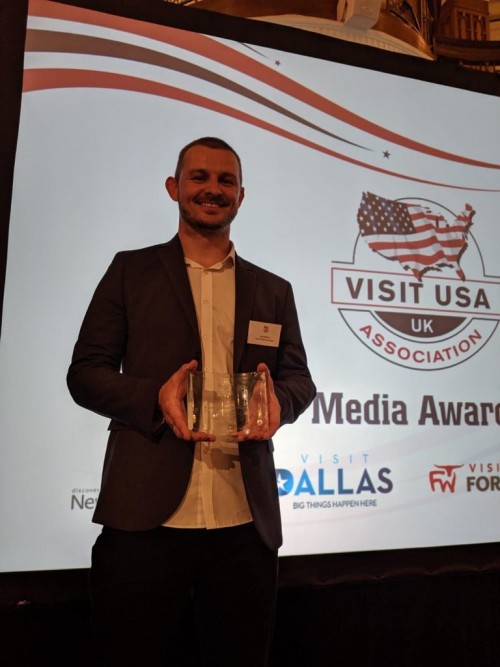 Said Carl: “This happened to be my first ever press trip. I had missed out in the past, whilst at the Express & Star I was chosen for a trip to Munich only to realise my passport had expired a few days earlier and I hadn’t the time to renew it. Or at least I didn’t think I had the time.

“When this came up at Birmingham Live I jumped at it and was a bit shocked to have been chosen having only been there a few months. As for the expedition itself it was honestly the trip of a lifetime. I saw some jaw-dropping scenery and made some great friends, one of whom is an American guy I still email on a regular basis.

“My day job is obviously writing about Birmingham City Council for the shared Local Democracy Reporting Service. It’s fun but has its restrictions in terms of the writing style, whereas I felt the shackles were off writing up this travel feature and it was a pleasure to put together.

“Going on these trips is a big perk of the job, but to be nominated and then win an award for it is a little surreal, I had some very warm feedback at the ceremony. Naturally I hope this paves the way for more memorable journeys in the future.”