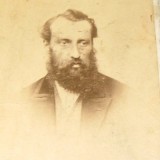 The hitherto-unpublished diaries of a Victorian regional journalist are to unfold on Twitter every day this year thanks to a journalism lecturer.

Andrew Hobbs, senior lecturer at the University of Central Lancashire, is tweeting extracts from the 17 diaries of Anthony Hewitson, who worked as a reporter, editor and newspaper proprietor in Preston, Lancaster, Kendal, Dudley, Wolverhampton and Wakefield.

The diaries, owned by Lancashire Archives, are the only known examples written by a Victorian provincial journalist.

Andrew has launched the Twitter account @HewitsonDairies last week and plans to publish the diaries of Hewitson, who was born in 1836 and died in 1912, in book form later this year.

Did not feel so very well this morning, having had two or three new year’s glasses at Robert Kellett’s. Anxious about a place for office and shop of [Preston] Chronicle. How will this year end? It is momentous.

Said Andrew: “I only started the account on New Year’s Day and already there’s been lots of interest, from people interested in journalism and in history.

“The diaries are amazing – they give a great insight into the working life of a local newspaper reporter and editor, but they’ve got so much more in them besides journalism – local politics, his family and friends, servants, his holidays, the books he read.

“He was a stringer for the Manchester Guardian and The Times, and scores of other papers around the country, and with the digitisation of old newspapers, you can track his stories as they spread around the country.

“Hewitson had an irreverent writing style, and he had no time for hypocrites, so he did a bit of tabloid journalism here and there – he exposed the vicar of Preston’s secret marriage to his young housekeeper, and once got hit over the head with a copy of his own paper because he’d said an alderman was an ass and a brainless fool.”

The diaries have been transcribed by Andrew and Margaret Dickinson, a descendant of Hewitson, and he is now researching the background to Hewitson’s life and times, writing footnotes and an introduction.

The diaries were one of the sources for Andrew’s new book, A Fleet Street in Every Town: The provincial press in England, 1855-1900, which can be downloaded for free here.

He added: “If Hewitson was alive today I’m sure he would be on Twitter, like every other journalist.”