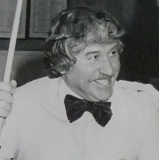 A “larger than life” photographer who worked for a regional daily for many years has died aged 75.

Tributes have been paid to Bob Cole, left, who worked for the Coventry Telegraph between the 1960s and 1980s.

His cousin Paul Webb, a former Telegraph sub-editor who worked with Bob for four years at the newspaper, described him as a “boisterous, larger than life character.”

He told HTFP: “We grew up together right from when we were small children and we often played together.

“We shared a love of both cricket and rugby, and played together for the Coventry Telegraph side. We shared some interesting times together opening the batting and the bowling.”

A talented all-round sportsman, Bob also had a trial as a goalkeeper for football club West Bromwich Albion in his youth.

Bob was born and raised in Bedworth, but lived in a home close to the former ground of Nuneaton Borough FC in recent years.

He was divorced, and had one daughter called Karina.

Bob’s funeral will be held at Nuneaton Crematorium at 1pm on 19 August.

Paul added: “There will be a horse-drawn hearse and a following of Land-Rovers.

“Bob was a very keen fan and collector of these vehicles and it will be a fitting reminder of his hobby.”