A second council has had a last-ditch bid to keep its fortnightly newspaper rejected by the Court of Appeal.

HTFP reported yesterday how the same court had ruled against neighbouring Hackney Council on the same matter, meaning it can no longer continue running its Hackney Today title.

Government guidelines state no local authority should publish a newsletter more than quarterly. 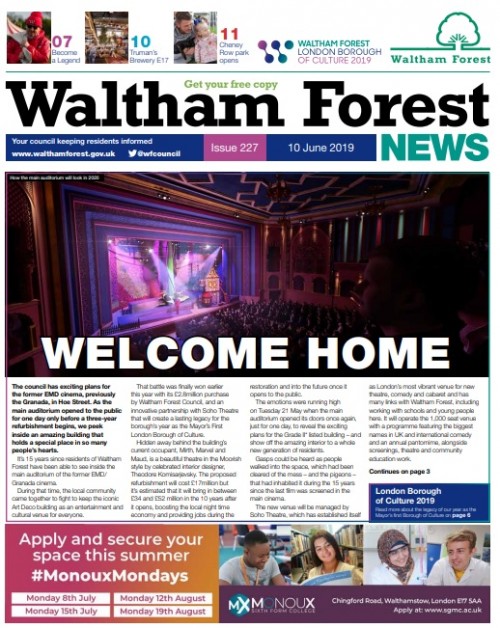 A Waltham Forest Council spokesperson told HTFP: “We are disappointed that council taxpayers’ money will now have to be spent on publishing public notices in an alternative publication. We only produce Waltham Forest News because the government, by law, insist that councils pay to publish statutory notices in a printed newspaper.

“These rules mean local authorities currently pay an estimated £68 million in council taxpayers’ money to comply with these rules. Waltham Forest News was our way of complying that also helps us communicate with all our residents, particularly those who are hardest to reach or who don’t have regular internet access.

“These are often the people most in need of help from our services. We know that our residents appreciate a newspaper that champions both the people and the area giving every household a vital guide to what’s on and what’s great about Waltham Forest.

“We will now be looking at all options to how best to communicate with our residents so that they don’t lose out because of this ruling.”

The decision has been welcomed by James Cracknell, editor of the independent Waltham Forest Echo.

He said: “The decision to stop publishing Waltham Forest News is nearly eight years overdue but is nonetheless very welcome. This propaganda pamphlet has caused significant damage to the viability of the local press in Waltham Forest, hampering our ability to hold the council to account and provide the balanced information voters need – essentially harming local democracy itself.

“The belated closure of WFN has come about not because the council has recognised the negative impact it has had but because they have finally been forced to comply with the law as a result of their defeat at the High Court.”