Declining advertising revenues and the rising price of newsprint have been blamed for a regional publisher’s decision to increase the cover price of a number of its titles.

JPIMedia has confirmed price increases for a “select” number of its newspapers, although the company has declined to say which ones or how many.

So far, only North-East dailies the Hartlepool Mail, Shields Gazette and Sunderland Echo have publicly confirmed the changes, with Joy Yates, the company’s editorial director for the region, publishing a piece explaining the decision to readers.

However JPI-owned national daily the i has also increased its price and HTFP understands that “tens” of other titles in the group have done the same, although most of its 200-plus local news brands are unaffected 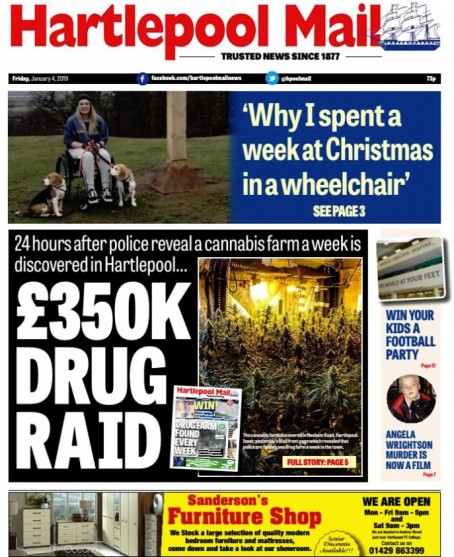 The North-East dailies increased prices by between 2p-3p from Christmas Eve, with the Mail increasing from 70p to 73p, the Gazette from 83p to 85p and the Echo from 78p to 80p.

Weekday editions of the i increased in price from 60p to 65p from New Year’s Day, while the cost of Blackpool daily The Gazette has also risen from 85p to 90p, and the Lancashire Post from 80p to 83p.

Wrote Joy: “The reason for this increase is not merely that our own costs are rising – true though that is. Historically, the lion’s share of the costs of our journalism and the production of our titles has been met by advertising.

“Without that advertising, if the reader was to pay the full price then each issue of the Sunderland Echo would cost several pounds. But that subsidy we receive from advertising is decreasing in a digital age.

“So if we are to continue to deliver the exceptional, trusted local journalism which I know you value, we have to charge a little more for the paper to help offset the lower advertising revenue.

“We are, as ever, seeking to keep the increase to a minimum so we are constantly looking at ways to reduce our own costs provided they do not impact on the quality journalism you expect of us.”

JPI Media told HTFP the price rises would apply to a “select” number of titles but declined to say how many or which ones.

Richard Thomson, publishing director of JPIMedia, said: “Increasing the price of our newspapers is never an easy decision. Newsprint (paper) prices continued to increase throughout 2018 by circa 12pc and are expected to rise further this year. Due to this the costs of doing business have grown.

“We are committed to reinvesting in the quality of our journalism and ensure we deliver the trustworthy reporting our readers expect.

“As a result, we are introducing price increases to a number of our titles.”