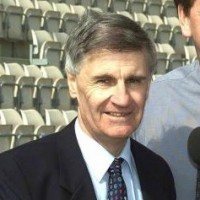 A regional journalist who was once a colleague of football commentator John Motson has died aged 79.

Tributes have been paid to John Hughes, who worked for Sheffield daily The Star and the Southern Daily Echo before going on to a career with the BBC.

While at The Star, he was a contemporary of Motson, who also worked on the Sheffield Morning Telegraph before going on to his commentary career.

According to the Echo, John went on to become “the voice of Hampshire sport” on BBC Radio Solent and South Today, commentating on Southampton FC, Portsmouth FC and Hampshire County Cricket Club.

Mike Vimpany, John’s former colleague, said: “John was my mentor as I embarked into sports writing and broadcasting, and became a great friend over a long period of time.

“He was a decent footballer and cricketer: a great bloke with whom the media ‘team’ spent many often amusing hours as he rushed around, often in a chaotic state as he tried to make radio and TV broadcasting deadlines.”

John later worked as a press officer at Hampshire CCC and edited the Southampton FC programme for many years.

After a long illness, he spent the last five years in a nursing home close to Southampton’s former stadium The Dell.

He died at the weekend and is survived by his wife Pat, two children and grandchildren.