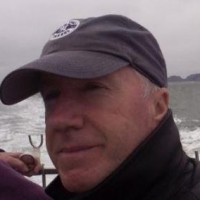 A journalist who served a daily newspaper for almost 40 years has died aged 63.

Tributes have been paid to Bill Tinning, left, who “never missed a deadline” while working for Glasgow-based daily The Herald.

Bill first joined The Herald as a 15-year-old ‘post boy’ and trained as a compositor before accepting the opportunity to switch to journalism.

After undertaking a course at Edinburgh’s Napier University he joined the paper’s newsroom, where he covered a wide range of news-related topics and also occasionally contributed to sport.

Barclay McBain, the Herald’s executive editor, told the paper: “As the move to new technology gathered pace Bill was one of the printers who made the transition from the case room to the print room. He did so with aplomb.

“He promptly settled in to editorial and became a valued and popular member of the news team. He had an inbuilt thirst for knowledge and was diligent in pursuit of stories, taking care always to check the facts before submitting copy which he turned round at pace and was always ‘clean’, ensuring he never missed a deadline.

“He had a wry sense of humour that served him and his colleagues well in the heat of a busy night in the news room. He was the epitome of what it took to be a hard-working, straight-down-the-middle Herald reporter.

“I know I speak for all of my colleagues past and present when I say I was greatly saddened to learn of Bill’s death. His family were very important to him and we think of them now.”

After taking voluntary redundancy in 2008, Bill worked for the Department of Work and Pensions.

He had been married to wife Elaine since 1980, and had two children, Wendy and Alan, as well as grandson Oliver.

Bill, who died on 3 May, is also survived by his brothers Jim and Robin and sister Lesley.