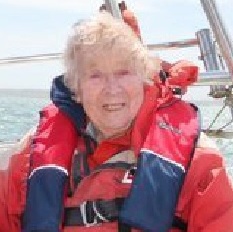 A journalist who served as a regional daily’s churches correspondent before going on to at career with the nationals has died aged 97.

Tributes have been paid to Peggie Robinson, who began her career on hometown newspaper the Shields Gazette, where she held the ecclesiastical role for a time.

Peggie later made Sheffield her home, arriving in the city soon after joining the Daily Express from the Gazette.

At the time, she was one of the few women reporters working in the national press, and covered everything from the Yorkshire Ripper to the Troubles in Northern Ireland.

An active member of the National Union of Journalists and life-long supporter of the Labour Party, she was also a highly-respected mountaineer and yachtswoman who played the bagpipes in pipe bands in and around Sheffield.

Journalist and close friend Clark Herron told the Gazette: “Peggie faced her failing health with the same feisty, indomitable spirit that she showed throughout her life, whether it was chasing a story, skippering her offshore racing yacht or climbing Alpine peaks, including the Matterhorn.”

Peggie died earlier this month, and her funeral took place on Thursday 23 May at Hutcliffe Wood Crematorium, Sheffield.