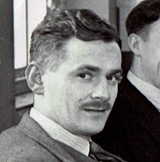 A regional and national journalist who later went on to run his own local newspaper has died aged 98.

Eric Carter, left, was the proprietor of the Dawlish Gazette for 10 years after a career which included two decades on Fleet Street.

Eric, who died from a heart attack on 15 January, began his career on hometown paper the Bideford Gazette, before serving in the Devonshire Regiment, and later on secondment with the Indian Army, during the Second World War.

He served in India, Burma and Malaya, rising to the rank of Major and earning a mention in Despatches for Distinguished Service.

After demobilisation, he began working for the Sevenoaks Chronicle, part of the Kent and Sussex Courier group, where in 1946 he met his wife Betty, a 19-year-old trainee reporter on the Courier in Tunbridge Wells at the time.

Betty, who turned 92 on Monday, said: “I only met Eric because he had an excellent shorthand note – he was sent over to Tunbridge Wells to cover an important meeting because his shorthand was so good.”

After his stint on the Chronicle, the couple moved to Devon where Eric worked on the Tiverton Gazette and then became the North Devon district reporter for the Western Morning News. This led, in 1951, to a role on the sub’s desk at the WMN’s head office in Plymouth.

Two years later Eric moved on to Fleet Street as picture editor of the Daily Sketch, and he later went on to work on various national papers and magazines including the Daily Express, Daily Telegraph and Sunday Pictorial, while he also briefly edited Men Only in the 1960s.

His final London job was as assistant editor of TV Times, before in 1972 Eric bought the Dawlish Gazette after being inspired by Fleet Street colleague Jimmy Hall, who had himself recently taken over the Sidmouth Herald.

Eric and Betty ran the paper for ten years, with son Nick working as a reporter, before selling up and moving back to Tunbridge Wells. Betty returned to the Courier while Eric edited the group’s County Magazine.

Upon retirement they moved to Leicestershire to be near their family.

Eric’s funeral will be held at Holy Rood Church, in Packington, Leicestershire, at midday on Wednesday 30 January.