A journalist who left a regional daily after a nervous breakdown has produced a series of shorthand-inspired works of art.

Ana Hine has created the art as a way to “discuss traumatic experiences without immediately alienating or upsetting the viewer” as part of her master of fine arts course at Duncan of Jordanstone College of Art & Design.

HTFP reported in 2015 how Ana had begun publishing her own women’s magazine called Artifical Womb, which she still runs, after recovering from mental health issues.

She had left her old newspaper the Dundee Evening Telegraph after being signed off work with stress, anxiety and depression. 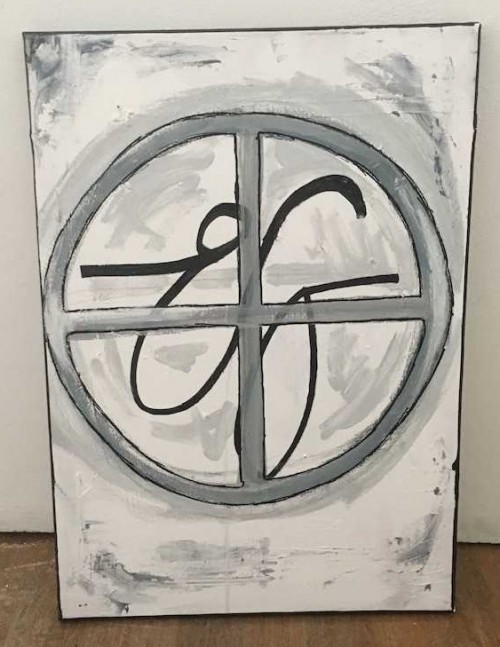 Ana made one of the pieces, entitled ‘Disqualified From Motherhood’, pictured above, after going through a miscarriage.

She told HTFP: “It says ‘disqualified’ in Teeline and I’ve trapped the word behind the symbol of a positive pregnancy test.”

Her works, known as ‘Shorthand Confessions’, will now be exhibited as part of a show at the University of Dundee.

Said Ana: “I sold one of the early paintings I produced as part of the project, as well as some prints. The response to the work has been very positive, especially the pieces about pregnancy loss.

“I posted ‘Disqualified From Motherhood’ on a Facebook group for women artists and I got more than 100 ‘likes’ and about 35 comments of people sharing their stories of pregnancy loss and saying how necessary the project is and how beautiful the piece is.

“All the works in the show will be for sale, so I hope that people buy pieces that appeal to them or that galleries might be interested in the work.

“I’ll also have a space within the show where people can write their own responses to the work – it’s a small room covered in blackboard paint and I’ll have chalk available. If people want me to translate their comments into shorthand for the interactive bit of the show I can do that too.

“I’m hoping to continue the project after I graduate, but, um, ideally that would be a follow up piece in maybe September once I’ve finished my masters and can start advertising for participants.”