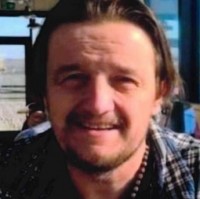 A journalist who also served as a football club’s stadium announcer has died aged 47.

Tributes have been paid to Justin Gladdis, left, who worked for the Isle of Wight Gazette..

Justin was better known as a broadcast journalist on Isle of Wight Radio for many years, later moving to Wessex FM, and also spent 18 years as an announcer at Southampton Football Club’s home games.

Southampton supporters paid tribute to Justin at their home game against Liverpool on Saturday, chanting “There’s only one Justin Gladdis.”

Wessex FM managing director Rick Simmonds told Radio Today: “Justin was one of the most warm-hearted, loyal and often amusing colleagues anyone could hope to work alongside.

“As a journalist, he broke hundreds of important news stories for Dorset and as a person, had a wealth of friends both within and beyond the building who will miss him terribly.

“He has left an indelible mark on all of our lives here – and our hearts go out to his family and friends.”

Justin, who grew up on the Isle of Wight, had studied journalism at Highbury College, Portsmouth, graduating at the age of 18.

He had suffered from ill health for a number of years and was recovering from life-saving surgery in April.

Justin died earlier this month and is survived by mother Dianne, father Melvyn, and sister Claire.