Journalism trainer who was ‘incredible educator’ dies suddenly at home 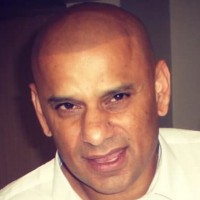 A journalism trainer described as an “incredible educator” has died suddenly at his home.

Tributes have been paid to Dr Amir Saeed, who was a senior lecturer in journalism and media at the University of Huddersfield.

He taught modules in media theory, sport, PR and music and had written about race, racism and Islamophobia in the media.

In an email to staff, Professor Cornell Sandvoss, head of Huddersfield’s media, journalism and film department, wrote: “It is with great sorrow that I write to you to inform you of the passing of our friend and colleague, Dr Amir Saeed.

“Amir was an exceptionally passionate and compassionate educator and researcher. He was a tireless campaigner against racism and Islamophobia, challenging patterns and structures of injustice and inequality.

“Like Mohammed Ali, of whom he was a great admirer, Amir sought to inspire his students, his friends and his colleagues to fight for a kinder, more inclusive, better world.

“I know that his proudest professional moments stemmed from those occasions when he knew had been an inspiration and role model to students, especially students from a minority background.

“There is, I think, no better way for us to honour Amir’s memory than to take these values to our hearts and continue this struggle. Amir will be greatly missed by all of us as a friend, as a lecturer, as a critical thinker, as a proud Glaswegian, a passionate Celtic supporter and in all the other important roles he had to many of us.

“The Department will make a book of remembrance available in the foyer of the Journalism and Media Building for those of you who wish to share their thoughts and memories.”

Lianne Hopper worked with Amir in Sunderland from 2006.

She told the Huddersfield Daily Examiner: “I worked with Amir from 2006 and he was an amazing friend to me. He was a big character with a heart of gold and I will deeply miss him.”

Amir died suddenly at his home in South Shields on 24 November, and it is understood that his funeral took place in Glasgow last month.

Neither the Examiner or HTFP have been able to establish Amir’s age.