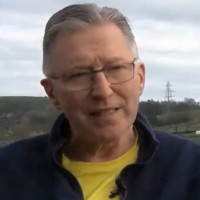 Two journalism students scored a national exclusive after interviewing a football referees’ chief who “died” after collapsing before a match.

Tom Mortlock and George Hodgson, who study sports journalism at the University of Central Lancashire, landed the first interview with Premier League referees’ assessor Eddie Wolstenholme since he collapsed after suffering a heart attack at Burnley’s Turf Moor ground in November.

Mr Wolstenholme told Tom and George he had been “dead for one minute and 40 seconds” during the incident, which happened before Burnley played Newcastle United in a league clash.

Their story, first published by student publication UCLan Live, has since appeared on national titles including BBC Sport, The Sun, Daily Mail.

It has also been covered by regional publications including the Lancashire Post, Lancs Live, Blackpool Gazette, Lancashire Telegraph, Burnley Express, and Newcastle Chronicle, as well as a host of specialist sports websites.

UCLan lecturer Andy Sykes told HTFP: “Both Tom and George are rightly proud of their efforts and it’s great to see the buzz they have received to see their story picked up so far and wide.”

Tom and George’s exclusive comes after HTFP recent reported how three journalism students at Cardiff University has scooped both national and regional titles to reveal former Wales international footballer Craig Bellamy had been convicted of drink-driving.

Andy added: “Tom also produced a very slick TV package for our newsday on Monday. It just shows a good story put together correctly is of interest to many multimedia companies. Hopefully it has inspired Tom and George to get more bylines in the national and regional press and also inspire their peers to see what can be achieved.

“I’d like to thank the media organisations which have run the story for including the link to UCLan Live – our website featuring the work of journalism students here at the university – which was the only credit we asked for.

“Eddie’s is a remarkable story and he was extremely complimentary of both Tom and George in regards to their professionalism and the questions they asked.”