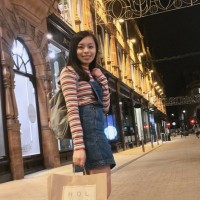 A journalism student has revealed her fears for her native Hong Kong in a piece for a regional daily.

Levenez Lai, left, who studies at the University of Sheffield, has spoken out about the current situation in the territory in a piece for Sheffield daily The Star.

Millions have taken to the streets in Hong Kong over recent weeks to protest against a proposed law which would allow the extradition of people, including foreign nationals, to face trial mainland China.

In her piece for The Star, 19-year-old Levenez said China’s “poor record on human rights” meant it was “not guaranteed that people being transferred will receive a fair trial”.

She wrote: “There has been significant unrest. Police without identifications on their uniforms used tear gas and rubber bullets to shoot unarmed demonstrators and journalists.

“Injured demonstrators’ identities have been disclosed and they were arrested at public hospitals while seeking treatment.

“Overseas students were stopped and checked by the police after leaving planes, questioned as to why they were returning. As a Hong Konger and journalist, I am heartbroken to see how human rights, as well as freedom of speech and the press, are being infringed.”

Almost one million people took part in a rally against the plans on 9 June, a number which double in a subsequent protest the following week.

Levenez added: “Sometimes I feel I am powerless, especially when I am staying in the UK and cannot attend any demonstrations. I can only show my support through sharing information online.

“This is what many Hong Kong overseas students are doing and why many protests were held globally and have gained international attention quickly. At least we do not need to be afraid of expressing opinions and attending assemblies here, in Sheffield and in the UK.”

She concluded: “Perhaps the century-long colonial relationship between Britain and Hong Kong still binds us together. We have to preserve our freedom, autonomy, justice and democracy that we have been proud of for so long.”