Journalism student issues warning after being mugged and slashed 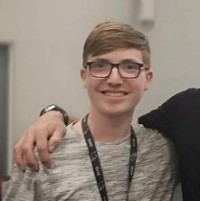 A journalism student who was mugged and slashed with a knife soon after starting his course has issued a warning to university newcomers in a bid to help them avoid the same fate.

Luke Thrower, who studies at the University of Derby, has opened up about the attack in order to caution First Year ‘Freshers’ unfamiliar with their new surroundings.

Luke, from Ipswich, was attacked while on a night out in Derby on 17 September last year – the day before he was due to start his sports journalism course.

He has now gone public about his experience and has spoken to the Derby Telegraph in the hope his story will alert hundreds of new students set to arrive in the city over the coming weeks.

The 19-year-old, pictured, told the Telegraph: “It was very scary as I was on my own and it’s not something you expect. I was walking back home and saw this guy brandishing a knife in front of me. I didn’t know what to do.

“He said ‘give me your wallet’, I naturally refused but then ended giving it him and as I was so close to my house I started to leg it around the corner but then he tripped me up and caught me with a knife.

“It all happened so fast, the next thing I remember I was lying on the floor.

“I was only in hospital for a few hours but the attack did take its toll on me mentally as I started university. It was difficult to move around in them first few weeks and I’m not very good now at walking in the dark. But I’ve been determined not to let it hold me back and I want to keep doing what I want to do.”

Luke, who also had his phone and passport stolen during the mugging, was attacked in an alleyway in the Bridge Street area of Derby, close to where a number of student accommodation blocks are situated.

Offering advice to new students, he said: “There are obvious dangers and I think it is best for students to make sure they know their way back home from a night out. If they don’t then I’d strongly suggest getting a taxi.”