A journalism student is bidding to become Miss England after competing in a beauty pageant in the county where she lives.

Niamh Kirk will compete in the final of the national contest after being selected as one of six Miss Leicestershire finalists to advance by judges.

Niamh, pictured below, graduated from Leicester’s De Montfort University this summer with a degree in English language and journalism, and is set to return in September to begin a master’s degree in investigative journalism.

The 21-year-old was asked to enter Miss Leicestershire after being approached by Miss England talent scouts in Leicester’s Highcross shopping centre. 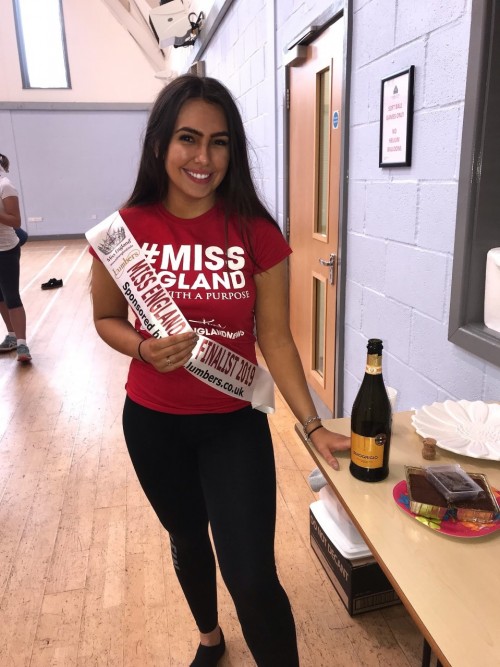 She told HTFP: “I jumped out of my skin because I had my earphones in and I hadn’t even noticed they were there. One of the ladies asked me if I would enter Miss Leicester.

“I said ‘never’ but she talked me into it by asking what my career aspirations were. I said I wanted to be a journalist and she said it would be great for that and for getting my name out there. I was still unsure but they persuaded me to do it.

“When I told my family they told me to do it for a laugh as I have nothing to lose, so I thought: ‘Why not? If I don’t take it too seriously there’s nothing to lose.'”

Niamh, who lives in Leicester, has already used skills learned on her course as part of her bid for the finals after conducting a broadcast interview with a man who had raised almost £200,000 for charity after recovering from being told he would never walk again.

She added: “I want to go into broadcast journalism so have gained knowledge and experience here.

“I’m hoping to gain some publicity to help pursue my career in journalism and hopefully become a TV or radio journalist.  I feel as though this was a good path for it like they said when I was scouted.”

HTFP reported in 2017 how Grimsby Telegraph journalist Laura Gooderham was crowned Miss Great Grimsby & District, which she entered after being spotted by a former winner while interviewing contestants.

Laura qualified for the Miss England final as a result, and later left the newspaper to retrain as a teacher and compete in more pageants.