Journalism graduate now ‘teaching vicars how to use computers’ 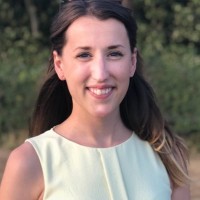 A group of recent journalism graduates who went into a variety of different careers have shared their stories at an industry training gathering.

A report by the NCTJ published earlier this year showed that 90pc of those who achieved the gold standard diploma on its accredited courses were working in journalism six to 10 months after finishing their course.

However the report also showed that a third of graduates from a previous 2015 survey have now left journalism for other careers.

Five graduates, some of whom have now moved into PR-related fields, took part in a panel discussion about career destinations at the the NCTJ’s journalism skills conference in Sunderland.

They included Eve Powers, pictured, who graduated from News Associates Manchester having previously wanted to become an TV sports reporter.

She worked for its in-house agency Sportsbeat before going on to roles as PR officer with British Cycling and then the Diocese of Manchester.

Eve joked: “The church has just realised that the internet happened.  My job is to tun all of our social media and deliver social media training and effectively teach vicars how to use computers.

“60pc of churches in the UK are providing food banks, some are providing after-school child care.  We’re doing such good stuff but we’ve bevcome a brand people don’t want to hear from any more so that is our challenge.”

Although she now works in PR, Eve said her journalism training has been the most important aspect of what she does and that the NCTJ course had beenn “my passport into better jobs and better opportunities.”

“I used to work at ITV and I always wanted to work in sport. I applied and applied internally and apparently I didn’t have the experience whereas younger male people did,” she added.

The conference also heard from Emily Parker, a Sunderland University journalism graduate now working as a social media executive at the betting outfit Tombola, and Abbas Panjwani, another News Associates graduate who now works for the fact-checking organisation Full Fact.

Elliott Jessett, who is now a digital content manager with Baltic Triangle CIC in Liverpool, went into journalsm after a mid-30s career change having funded himself through the NCTJ course.

Asked why he had not gone into a more traditional newsroom role, he said: “A lot of the entry level stuff is writing stories which get decent engagement on social media, but maybe not the stories you fantasised about writing when you changed your whole life to be a journalist.”