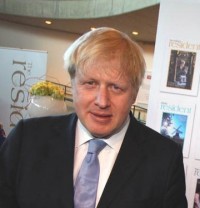 Prime Minister Boris Johnson has recalled his stint in regional newspapers revealing he was regularly sent to cover stories about UFOS, cats stuck up trees and toddlers locked in the toilet.

Mr Johnson, left, worked as a reporter on Wolverhampton daily the Express & Star in the 1980s and is believed to be the first British PM to have begun his professional career in the regional press.

Hosting a reception for industry leaders at 10 Downing Street, Mr Johnson said the paper’s then chief reporter, Dave Knight, had instilled in him the motto: “Do it the right way, do it the Express and Star way.”

The PM also joked that his “one mission” in his remaining time at No 10 was to keep the press supplied with stories.

Thanking his visitors for attending, Mr Johnson said: “Extensive searches on Google have just confirmed to me what I have long believed to be the case — I am the first Prime Minister of this country to have begun a professional career as a journalist on a regional newspaper. That’s absolutely true.

“As you know, I was on the Express and Star, where if there was a toddler locked in the toilet, or a cat stuck up a tree, or if an elderly gentleman had discovered an unexploded WW2 bomb in his back garden, as often happened, then I would be sent on that story.

“I was also sent on UFO stories, for some reason, and the great Dave Knight of the Wolverhampton Express and Star, told me that they didn’t do UFO stories.

“He memorably said to me once, he said, do it the right way, do it the Express and Star way, and I’ve tried to follow that.”

Mr Johnson added: “As a former newspaper journalist I know the unbelievable importance of your institutions to the communities that you serve. You are the cultural news, political lifeblood of the areas that you serve.

“I cannot tell you when exactly we are going to be allowed to make our case again to the British people and to seek the thumping mandate and majority I think we need to take this country forward.

“But what I can tell you is that when that moment happens, and it may be pretty soon, that I will make sure we get out and about to see you all and I make myself available to everybody and that we keep you fully supplied with the stories that you want.”

Mr Johnson was speaking last week ahead of the Tory Party conference which began yesterday.

He has since been mired in allegations – which he denies – that he groped a female journalist during his spell as editor the Spectator magazine in 1999.