The Farnham Herald broke the news that Mr Hunt is to stand for the Tory leadership after Mrs May announced she was stepping down on 7 June.

Herald reporter Lettie Buxton was at Guildford railway station, reporting on an event to mark the resumption of direct train services to Farnham, when Mr Hunt took the phone call that Theresa May was to stand down.

The MP for South West Surrey then took a train to Haslemere to give a talk at the Haslemere Festival, where Lettie’s Herald colleague Bea Phillpotts got the scoop as Mr Hunt announced his candidacy. 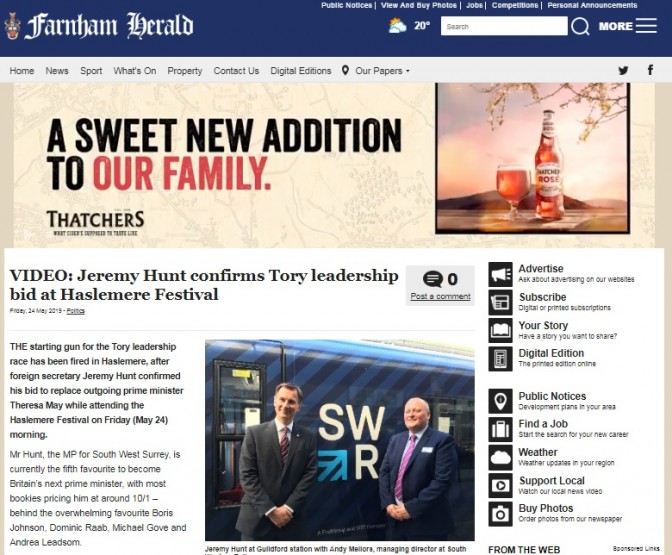 How the Herald covered the story

Daniel Gee, head of content at Herald owner Tindle Newspapers Surrey & Hampshire, told HTFP: “After sharing the news online at Farnhamherald.com, traffic on the website has soared, and many of the country’s top political commentators including the BBC’s Laura Kuenssberg have retweeted the Herald’s coverage.

“The national media has also picked up the Herald’s story, with Sky News, ITV, The Independent and Mail Online sharing the Herald’s video interview with their audiences.

“We’ve also received some lovely comments on Twitter highlighting the value of the local press, the pick of the bunch coming from ITV Meridian news editor Adam Clark, who tweeted: ‘SCOOP. This is why local newspapers are still so important. They lead. We all follow.'”

Earlier today, the Wokingham Paper had followed in the tongue-in-cheek regional press tradition of using a headline downplaying a major world event by running with ‘Sonning woman resigns from job’ on its website.

An accompanying story by editor Phil Creighton reads: “A woman from Sonning handed in her resignation this morning.

“She has given two weeks’ notice to her employers and announced her departure quite publicly, on the steps of the office door where a passing television crew happened to be waiting.

“The subsequent pictures have gone viral on the internet with many television and radio stations picking up on the story.

“The woman said: ‘I will shortly leave the job that it has been the honour of my life to hold… I do so with no ill-will, but with enormous and enduring gratitude to have had the opportunity to serve the country I love.'”

The Paper also ran a more serious piece about the Maidenhead MP’s resignation on its website.