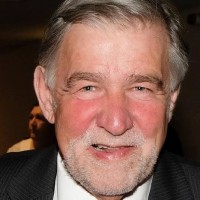 A regional daily journalist who retrained as a social worker has died while visiting family abroad.

Tributes have been paid to Nic Fogg, pictured, who worked at Blackpool daily The Gazette from the late 1970s to the mid 1980s.

Nic was based at The Gazette’s Blackpool and Fleetwood offices during his time there, but he later moved to Wales to train as a social worker.

According to The Gazette, it is understood Nic fell ill while on a trip abroad to visit family.

Former Gazette journalist David Pearce told the newspaper: “I worked with Nic when he was a news reporter at The Gazette’s Blackpool and Fleetwood offices.

“He was an intelligent and perceptive man – good at his job and well liked by his colleagues.

“During his Fleetwood service he and photographer Bill Johnson went to sea on a trawler to write about fishing for mackerel off the Cornish coast which had become a major part of the Fleetwood industry.”

Another ex-Gazette colleague, former features writer Jacqui Morley, said on social media: “So saddened by this, I know other former colleagues are too.

“Nic brought such integrity to his reporting. And he didn’t just report from the sidelines, he got stuck in, and later made an even more valuable and tangible contribution to society.”

Following his move to Wales, Nic returned to Lancashire’s Fylde coast when he moved to the village of Preesall around 20 years ago.

He was also involved with the local Labour Party and volunteered at Fleetwood Museum.

Cat Smith, Labour’s candidate for Lancaster and Wyre seat in the forthcoming election, said: “It’s with huge sadness we have learned of the sudden death of our friend and comrade Nic Fogg,

“Once a social worker, even in retirement he couldn’t help but help people.”