An independent weekly has bought its own high street office after outgrowing its original home.

The Driffield & Wolds Weekly has purchased a new headquarters on Middle Street South, in the centre of Driffield.

The newspaper had been in rented premises in the Yorkshire town since it was founded by Andy Stabler, after he took voluntary redundancy from the now-defunct Driffield Times & Post in 2015.

Andy says he is still seeing sales increase as the paper closes in on four years of publishing, with sales up again year-on-year. 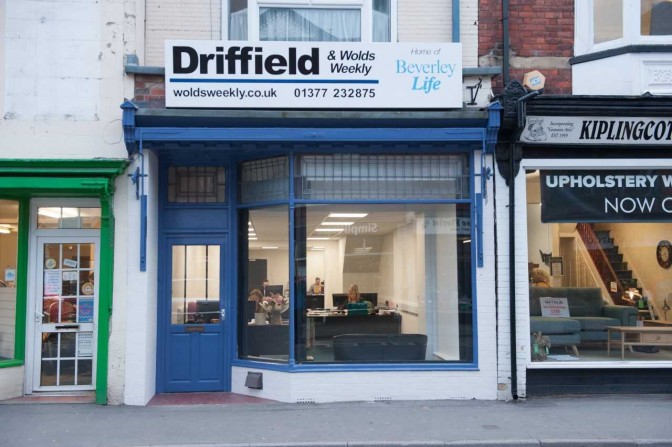 The new office, pictured, was formerly owned by Horsley & Dawson, a printers of 100 years.

Said Andy: “In this day and age, as many newspapers leave the high street, it’s a very proud moment for us to go against the tide.

“And as newspapers across the country see their sales decline year-on-year, again we go against the tide, as only last week we sold more copies than the corresponding week last year.

“You hear people say they read their news online, but where we are successful with the Driffield & Wolds Weekly is that over 95 per cent of our content you will only find in the paper and nowhere else. And it’s all local.

“The new sign is up above the office, which also includes the free monthly Beverley Life logo. We have been publishing Beverley’s only newspaper for well over a year.”