A “gregarious and fun” regional daily cartoonist has died unexpectedly at the age of 51.

Tributes have been paid to Russell Campbell, pictured, who penned the Causeysiders column for the Paisley Daily Express for more than 20 years under the name ‘Rus’.

Father-of-two Russell’s body was found in the village of Lochwinnoch on 6 January, and Police Scotland has confirmed there are no suspicious circumstances surrounding his death. 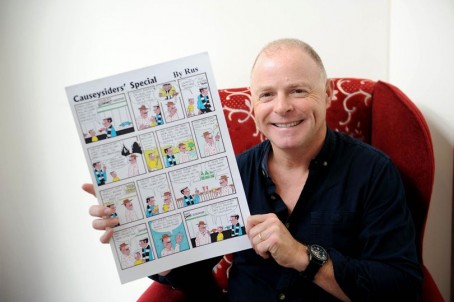 “His Causeysiders cartoon has been a popular and much talked-about feature in the Paisley Daily Express for more than 20 years, and will be missed greatly by our readers.”

Russell, who was also a marketing lecturer at the University of the West of Scotland and published two novels, is survived by wife Anne, as well as sons Fraser, 17, and 15-year-old Struan.

Anne, to whom he was married for 23 years, told the Express: “He was the most fabulous person you could ever meet. He was gregarious, and fun to be around. He was creative and he loved his family.

“He had so many friends in the village of Howwood, where we are from. He had a word for everyone. He wasn’t a shy guy.”

She added: “People have said to me he always had a smile on his face. He was always up for a laugh and joke. He loved to wind people up from time to time.

“He was a talented musician, he played the bagpipes and regularly played at weddings for friends and events for Renfrewshire Chamber of Commerce.

“He loved his two sons hugely. He got Fraser and Struan into music, and he was a coach fo Struan’s football team for a couple of years too.”