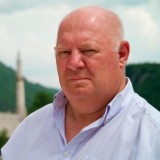 A former regional journalist has released a film showing himself suffering a psychotic episode as part of his campaign for a review into the medication which he claims caused it.

Malcolm Brabant has produced the documentary, called ‘Malcolm is a Little Unwell’, which features footage, largely shot by his wife, of him ranting about the messiah, the devil and the Second Coming.

Malcolm, pictured, worked for his hometown newspaper the Ipswich Star, before travelling the world as a foreign correspondent.

But, before a work visit to Africa in 2011, Malcolm took yellow fever vaccine Stamaril, and he says he was “burning up”, shaking violently and hallucinating within 18 hours.

The film shows Malcolm detained in psychiatric wards in Greece, Denmark and the UK, and features psychotic episodes including footage he recorded believing he was documenting the Second Coming and when he thought intelligence services were targeting his family.

He has since returned to work after making a full recovery, and has now written to Theresa May calling for a meeting about a possible review into the vaccine’s use.

Malcolm told his old paper: “I want to be clear this is not an anti-vaccine rant, but an attempt to raise the issue of corporate responsibility and to ensure nobody else has to suffer like my family and I did.”

Vaccine manufacturer Sanofi Pasteur offered its sympathies to Mr Brabant, but has denied responsibility for his illness.

In a statement to the Star, the company said: “After carefully examining all the medical information that was disclosed to us up to April 2013, no evidence was found for a causal relationship between the administration of the yellow fever vaccine Stamaril and Mr Brabant’s reported medical conditions. Follow-up was also conducted in 2015 with the same conclusion.

“Vaccines are easily suspected of causing adverse events without any firm evidence other than the fact the event was observed following vaccination. Without yellow fever vaccines, travellers could not safely visit countries where the disease is being actively transmitted.”