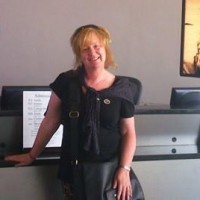 A former regional journalist and lecturer who worked on several daily newspapers has died aged 55.

Pauline Taylor, pictured, worked on titles including The Scotsman, Daily Record and Glasgow Evening Times during her career.

More recently, she had written for the Daily Business on a freelance basis.

Pauline worked as a linguist at BT from 1985 til 1991 and graduated with a degree in English literature from Strathclyde University in 1994.

She gained a postgraduate diploma in journalism in 1996, and then spent four years working for the Ayr Advertiser.

Pauline then went freelance and wrote for titles including for The Scotsman, Sunday Times, Daily Record, Sunday Mail and Glasgow Evening Times.

She was a media and communication lecturer at James Watt College/Ayrshire College between 2001 and 2015, before moving to Leith to be a freelance PR, arts and lifestyle writer for the Daily Business.

One of her former students tweeted: “Sad to hear the news that my old lecturer and the work colleague of many a year Pauline Taylor has sadly passed away.  A lovely woman and a someone who always liked to give me a good film recommendation.”

Pauline died on 6 November, just a week after her 55th birthday. Her funeral was held on 26 November.