A former regional daily news editor discovered a Bible written in shorthand – but says he failed to have a “road to Damascus” moment as a result.

Graeme Patfield, formerly of Portsmouth daily The News, found the Bible at a bookshop but was unable to read it because it is written in Pitman shorthand, rather than the Teeline in which he is trained.

Graeme, who trained at Highbury College in the mid-1990s and spent time with various EMAP and Newsquest titles before working for The News from 2005 to 2013, is now a director of Fareham-based PR company Polymedia.

He made the discovery at secondhand bookshop Kim’s, in Arundel, Sussex. 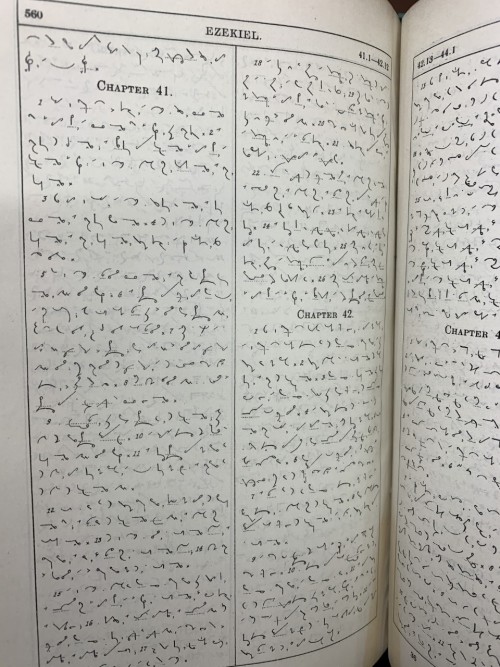 How the shorthand Bible looks inside

Of his discovery, Graeme told HTFP: “[Kim’s is an] amazing little place with thousands of secondhand books neatly categorised, and this was on display and caught my eye.

“If it had been in Teeline, which I was trained in, I might have thought it was a sign from the Almighty.

“But since it was in Pitman I assume someone else will have their road to Damascus moment.”

The find subsequently led to a discussion on Graeme’s Twitter feed about whether the copy was actually written in Teeline.

Added Graeme: “Everyone concluded that they couldn’t read it either.

“Only God knows why someone decided it was a good idea to convert it into shorthand.”

Weirdest find in a bookshop – the Bible in Pitman’s Shorthand. Shame I only learned Teeline pic.twitter.com/SensM1CXpk