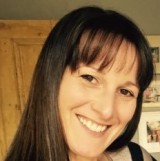 A former regional daily journalist has won a national award for her blog about motherhood.

Helen Copson , who was health reporter and deputy news editor at the Plymouth Herald before leaving to have her family, has received the Britmums Brilliance in Blogging Award 2019.

Helen, pictured, who still writes a column for the Herald’s Plymouth Live sister website, triumphed in the Readers’ Choice category despite being up against much more experienced bloggers with larger followings than her.

She told Plymouth Live: “I’m absolutely over the moon to win the award. I honestly thought I stood no chance against the bigger, more experienced bloggers.

“They’ve been going a lot longer than me and have much bigger followings, so I couldn’t believe it.

“It was announced on Twitter and I had planned to follow it with a nice hot coffee whilst my twins napped and Thomas was at school.

“It turned out Thomas was off sick with a bug, and Isaac refused point-blank to nap, so instead of the hot coffee, I almost missed it amidst fights over the wooden train set and digging squashed-in Play Doh out of the rug.”

Helen previously won the Fresh Voice category in the top industry awards last year – a section for bloggers who had only been blogging for less than 18 months.

She added: “I love doing the blog, and writing something that is completely realistic rather than putting a rose-tinted filter on parenting like so many blogs do.

“Being a mum is amazing, but it’s not brilliant 100% of the time, it’s really, really hard work, especially when you’re with your children all day, every day and I’m not afraid to admit that on my blog.

“I get so many people saying that I make them laugh with my honesty, and that they can completely relate to the situations I write about with three young children.”