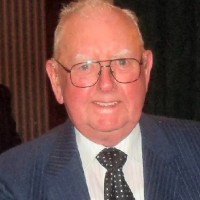 A former regional daily journalist described as a “true gentleman” has died aged 89.

Tributes have been paid to Derek Gledhill, left, who worked as a reporter on the Yorkshire Post “for many years”.

Derek worked for the Leeds-based Post between the 1950s and the 1990s.

He also wrote for its sister title the Halifax Courier.

A short obituary on the Post’s website states: “His first love was local cricket and he remained close to Elland Cricket Club throughout his life, serving on the committee at the Hullen Edge ground for more than 60 years and putting in stints as chairman and secretary.

“He also wrote a history of the Huddersfield League club.”

Elland CC posted on its official Twitter account: “It is with great sadness that we announce life long member and former cricket secretary for 40 years, Derek Gledhill, has passed away.

“A true gentleman and legend of the club. He will be missed by all.”