A former weekly editor who was also the last of four generations of his family to own the newspaper has died aged 83.

Tributes have been paid to John Bright, who was editor and proprietor of The Forester and its predecessor titles from 1974 until its sale to Northcliffe Newspapers in 2000.

The three titles were merged into The Forester, which is now owned by Tindle Newspapers, in 1991. 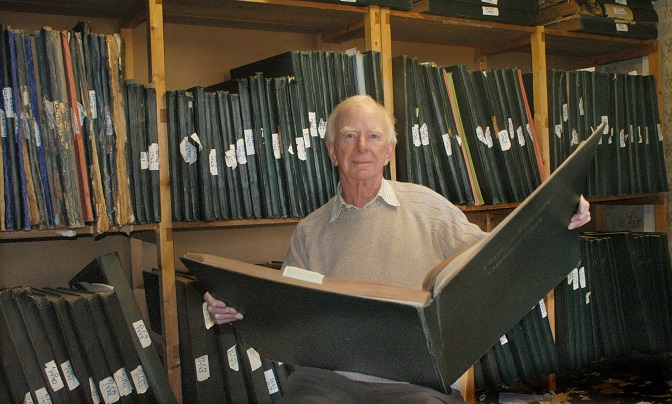 John, pictured above delving through the newspaper’s bound volumes, died in a nursing home after a long illness.

Tributes have come from a number of former colleagues including Viv Hargreaves who was editor during the Northcliffe years.

She said: “It was obvious that newspapers were in John’s blood. Throughout the first few months during the newspaper’s ownership change in 2000, John played a vital role during this period of change.

“Throughout my tenure as editor, John would pop into the office, often after a round of tennis, to ask how things were going and bring in articles covering a range of subjects from local historical interest to performances of his beloved Coleford Amateur Dramatic Society.”

Another tribute came from Richard Morley, who at the time was owner of Clearwell Castle and gave John the ‘scoop of his career’ with the Forester leading a campaign to help prevent Mr Morley’s adopted Nepalese son from being deported by the Home Office.

He said: “John was extremely polite and seemed fascinated by our story, particularly as the local castle was affected and my son stood to inherit a multi-million fortune whilst still threatened with deportation for unspecified reasons.

“We did not consider the story to be of public interest, but John published it the next day as front page news. And within hours of the story being published, the national media began contacting us.

“It was a long six-year campaign, and I shall always be grateful for John’s involvement.”

The Dean Forest Guardian was originally launched by Thomas Bright, who ran the newspaper at Charles Cooper Hough’s Crown Printing Works in Coleford.

Thomas’ son Arthur succeeded him as editor at the age of 22 in 1890, following his father’s death from tuberculosis, and he ran the business until 1922 when he went into partnership wth Harry Grimwade, who owned the Mercury and the Observer.

In August 1938 Arthur’s son Harold took over the business with John, the fourth generation of the family, joining the business in the 1960s.

As well as running The Forester, John also helped save the Monmouthshire Beacon from closure by agreeing to print the newspaper in 1963 after its own presses were wrecked in a fire.

John’s son, Richard, said that his father had not been well for some time and that the family were on hand to celebrate John’s 83rd birthday at the end of June.

He said: “We were so lucky to celebrate Dad’s 83rd birthday as it was a fitting last hurrah. Family members visited John, who was on fine form. We had a marvellous whizz around the care home’s gardens in the June sunshine.

“It was a lovely end to a lovely life which he enjoyed to the full.”