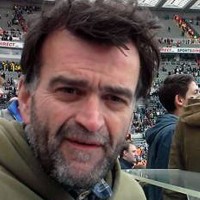 A former regional daily journalist “whose words lit up the page” has died aged 52.

Tributes have been paid to Steve Tucker, left, who worked for the South Wales Echo, Western Mail and their Wales Online sister website for a number of years, both as a news and sports writer.

As well as roles including local government reporter and Cardiff City FC reporter, Steve was also known for his Tucker’s Travels column which saw him write about different areas of Cardiff.

He passed away suddenly at home from natural causes last Tuesday.

Former Echo editor Alastair Milburn told Wales Online: “I soon realised after I became editor of the Echo that in Steve Tucker we had an absolute talent – a very worthy successor to Echo legend Dan O’Neill who was coming towards the end of his career.

“He wasn’t afraid to say the things that others were thinking – and with it, came a dry and acerbic wit – it was as sharp and funny as I have ever come across. I should add that that humour was never malicious or hateful.

“Cardiff born and Cardiff bred, we came up with the idea to channel Steve’s passion for the city with his flowing, laugh-out-loud prose – the result was Tucker’s Travels. We duly dispatched him each week to a different part of the city, and he wrote about what he saw.

“There were a couple of occasions in the proofing process where I thought: “We might have a problem here!’ such was the brutally accurate and funny observations Steve would make. I do recall one protest outside the then Thomson House from a group of agitated readers from one offended suburb – I won’t say which.

“But the beauty of Tucker’s Travels was that every suburb in the city was fair game to Steve – and that was the beauty of the series: Cardiff was – as it so often does – having a good, old laugh at itself.

“I can still picture that wry, amused smile on Steve’s face as another ‘Mr Angry’ called the newsdesk to complain about his latest Travel piece. Happy memories. Rest in peace, Steve.”

Steve first joined the Echo as a news reporter in June 1998, moving to the Mail as a football reporter in 2006.

After leaving Media Wales in 2016 he worked for BBC Wales as a sports journalist, and was most recently working for a finance company in Cardiff called Target.

Steve also spent some time living in Japan where he met his ex-wife Takako, with whom he had two children Nina and Tyler.

His close friend and former colleague Greg Lewis said: “What comes into my mind when I think about Steve is laughter. Working with him was fun, socialising with him was even better. He was witty, well-read, opinionated, truly larger-than-life.

“As a journalist he turned a simple feature into something cuttingly funny and often provocative. He could find the humour in anything and was bold enough to write it. Steve is one of those people who seemed to have so much personality that it is hard to believe he is gone.”

Steve’s funeral will be held at Thornhill Crematorium, in Cardiff, on 13 May.