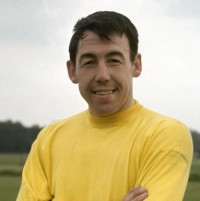 An award-winning former regional daily features writer has received national attention after sharing advice given to his son by Gordon Banks.

Lee Marlow interviewed the World Cup winner, who has died aged 81, while working for the Leicester Mercury, and asked the former England star what advice he had for his son, and aspiring goalkeeper, Lucas.

While the wise words from the former Leicester City and Stoke City player did not appear in Lee’s subsequent feature, he transcribed the notes and gave them to Lucas – who keeps the advice on his bedroom wall today.

After news of Banks’s death was announced, Lee posted a picture of the advice on Twitter which was subsequently widely shared on the social media site.

I interviewed Gordon Banks when I was at the Mercury.
I told him my lad played in goal.
I didn’t put his response in the story but it was so lovely I transcribed it and gave it to my son.
It’s still on his bedroom wall today.
God bless you, Gordon Banks x pic.twitter.com/ItGZmqQwTQ

Those who have shared the tweet include former international footballers Bob Wilson, Ray Clemence and Chris Sutton.

Lee subsequently received requests to use the image from BBC Radio Five Live, The Sun, Daily Mail, Daily Telegraph, Independent and The One Show, as well as his former paper.

Lee, who won Feature Writer of the Year at the Regional Press Awards three years running prior to leaving the industry, told HTFP: “He was just a lovely, decent, easy going man.

“I interviewed a lot of footballers and rock stars. I rarely felt nervous. I felt nervous interviewing him, but he was brilliant.

“The advice at the end didn’t make the interview – it was too personal – but it’s been on my son’s bedroom wall ever since.”

Leicester City supporter Lee now freelances and teaches journalism at De Montfort University and Birmingham City University after being made redundant by the Mercury in 2016.

Tributes to a football icon this morning from two of the Midlands most iconic newspapers. Well done to my colleagues at @Sotlive and @leicslive @MartinTideswell @GeorgeTSOliver pic.twitter.com/qypOjIIQdh

Both the Mercury and Stoke daily The Sentinel have run tributes editions to Banks.

The passing of a hero, a legend and a true Sheffield great is marked on our front page tomorrow
RIP Gordon Banks pic.twitter.com/bXdETwqYNS

His death also made the front page of his hometown newspaper, Sheffield daily The Star.