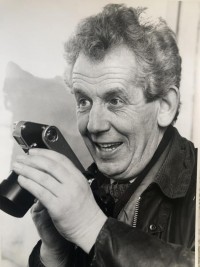 A press photographer who was first on the scene of the Lockerbie bombing in 1988 has died aged 80.

David Mitchell, left, was named News Photographer of the Year for his pictures from the scene of the disaster which appeared in newspapers all over the world.

The main roads through Dumfriesshire were closed immediately after the downing of Pan Am Flight 103 from Frankfurt to Detroit in which all 243 passengers and 16 crew were killed.

But using his local knowledge of the area’s narrow back roads and farm tracks, David was able to navigate to the scene of disaster and take the first photographs, one of which won him the award.

Together with business partner Brian Averell, David has started his own photographic agency, Mitchell and Averell, in the 1970s, initially undertaking assignments for their local paper the Lennox Herald as well as taking school photographs.

At the time David bore a strong resemblance to the then Doctor Who, Tom Baker, and on one occasion pupils gifted him a replica of the Fourth Doctor’s trademarl scarf.

Over time the agency business grew and David moved on to start a new agency in Glasgow – MacPhoto – branching out into national and international news.