Feature writer who was ‘investigative journalist by nature’ dies aged 76 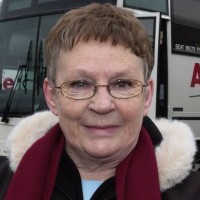 A feature writer described as an “investigative journalist by nature” has died aged 76.

Tributes have been paid to Hazel Tomlins, left, who worked for the Scunthorpe Telegraph for many years when it was a daily newspaper.

Hazel, who died on 24 March, l had followed her father, who was a photographer with the Telegraph and the Lincolnshire Times, into journalism.

In June 1974, she was among the journalists to cover the Flixborough disaster, which claimed 28 lives when an explosion ripped through a chemical plant near the River Trent.

Former colleague Nigel Fisher said: “Hazel was a Telegraph reporter s for her accurate note-taking abilities and diligence; she was a very reliable member of the newsroom, in a variety of roles.

“With tight publication deadlines to meet and busy business owners to interview, this was rarely an easy task, but she always ensured things were completed on time. She excelled in this role over many years.”

Hazel regularly reported on major meetings of Scunthorpe and Glanford Borough Councils, and also ran a weekly Focus on the Arts page.

She later became a specialist feature writer and wrote the Telegraph’s Property of the Week article, while also serving as welfare officer of the Scunthorpe and Brigg Branch of the National Union of Journalists.

Hazel’s daughter Ruth Leckie told the Telegraph: “She was an investigative journalist by nature and could always sniff a story out.

“She would always talk to people and had a knack of talking to people about them but she was a very private person in many respects.”

Ruth added: “My mum was unique, she was one of a kind in many respects and I hope people will remember her for what she did for the paper, for people coming into the paper and the world of journalism locally.”