A regional daily is bidding to help save a young woman’s life as the result of an exclusive story by a new Facebook-funded community reporter.

Rakeem Hyatt, who is employed under the scheme aimed at better representing communities currently underserved by the regional press, landed his first splash for the newspaper after revealing the story of Sunaina Paul.

Ms Paul, 31, has been given only months to live and needs a liver transplant to save her life, and her family contacted Rakeem in a bid to raise awareness about a shortage of ethnic minority donors.

The Mail ran the appeal to help her find a donor on the front page of Saturday’s edition, as well as on its Birmingham Live sister site. 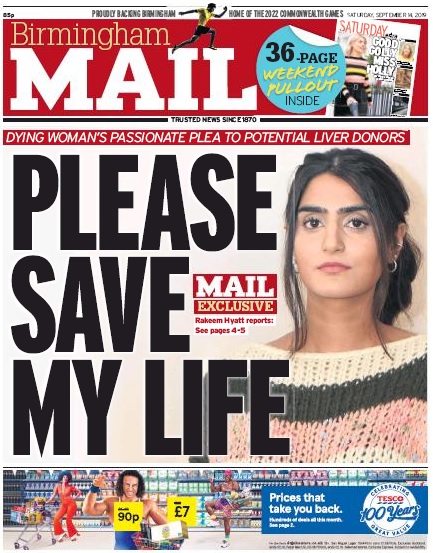 Rakeem told HTFP: “Sunaina’s story is heartbreaking but she is a brave individual.

“Despite the sensitivity surrounding her circumstance, she welcomed me whole-heartedly into her home to share her story with the desire to call on more ethnic minority donors.

“I hope the story on Birmingham Live has the ability to encourage more people across our varying communities to think further about the part they can play in helping someone just like Sunaina.”

“Since publishing, we have received lots of messages of support for Sunaina and are hopeful that a suitable donor will be found.

“Sharing a personal journey like this is an incredibly courageous thing to do but her story can only help to raise awareness of this important issue.”

At this year’s Pride of Birmingham Awards, run by the Mail, there was a lifetime achievement award for Rosemary Cox, who led the campaign which resulted in the setting up of the NHS organ donor register.

She dedicated her award to the 18,000 donors who have given the gift of life since the register was founded in 1994.

Mail print editor Paul Cole said: “Both the Birmingham Mail and Sunday Mercury have a proud tradition of helping our readers in times of great need.

“This is not the first time we have highlighted a case like Sunaina’s on page one, and I am sure that it will not be the last.

“I just hope that a donor is found in time.”