A former regional press photographer has been honoured for a picture he took of a sitcom reunion.

Paul Nicholls has been awarded Gloucester City Council and Marketing Gloucester’s ‘Gloucester Goes Retro’ Photography Award for his photograph of some of the original cast members of ‘Allo ‘Allo!, which was taken outside Gloucester Cathedral.

The photograph appeared in the national press, and internationally too.

Paul, a two-time winner of the South West News Photographer of the Year award, worked for regional titles including the Western Daily Press, Gloucestershire Echo and Gloucester daily The Citizen during a 28-year career in the industry. 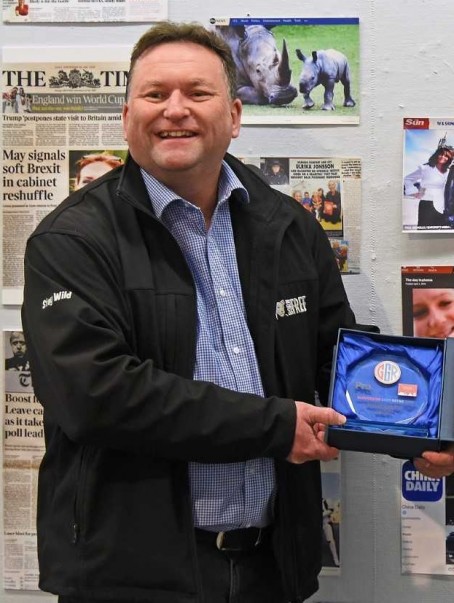 Paul Nicholls with his award

However, he was made redundant shortly after winning the prize for the second time in 2014.

Paul told HTFP: “I am honoured to win an award from my home city of Gloucester and I also thank them for sponsoring me to showcase my work at my exhibition ‘Capturing the Moment’ at the Museum of Gloucester until March 2019.

“Redundancy after 28 years in the industry was tough but also reinvigorating. The world is now my oyster and I am regularly published nationally and worldwide with my news pictures.”

Paul also works for a variety of clients in the worlds of PR, media, business, sport, charities, politics, and has covered private visits by royalty and VIPs to different organisations.

He added: “The last four years as a freelance have been exciting and very fulfilling, and I look forward to working with existing clients and new ones in 2019.”