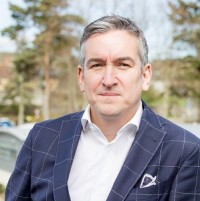 A former UK regional daily editor who co-wrote a book about Donald Trump has claimed the media is “not portraying the right image” in its coverage of the US president.

Damian Bates, who edited Aberdeen’s Press & Journal between 2013 and 2017, say he believes newspapers are “caught up in wanting to show the worst” of Mr Trump.

The former news chief, pictured, has known Mr Trump since he proposed building a golf course in Aberdeenshire around 10 years ago, and is married to Sarah Malone, who ran the project.

Damian has co-written the book with George Sorial, who was an adviser to Mr Trump prior to his election in 2016.

Speaking to Glasgow daily The Herald about the book, Damian said: “As a newspaper man, I feel a little uncomfortable that we’re not portraying the right image.

“We’re so caught up in wanting to show the worst of people, particularly at that level, we’re not prepared to go ‘let’s step back and there might be a different narrative.'”

He added: “We’d seen a lot of books by writers that claim to know Donald Trump but had never spoken to him.

“My view was: I’d known him over the years. We’re not saying this book is the Bible, we’re saying this is our view. Just read it and make your own mind up.”

As previously reported on  HTFP, the book also features claims by Mr Sorial that former Scottish First Minister Alex Salmond once attempted to broker a deal which would have seen Mr Trump become owner of The Scotsman, although this has been denied by a spokesman for Mr Salmond.

Damian also discussed the president’s temper in his interview with The Herald.

He said: “When he blows his top it’s not pleasant but it made me laugh because people would say ‘oh my God, he’s got a terrible temper’ but I’ve seen newspaper editors who are way worse. I’ve been pinned against a wall by an editor.

“The one thing I would say is you know where you stand with Trump. If we’re going to fight, it’s going to be dirty. I don’t mind that. Alex Salmond used to berate me down the phone but I used to enjoy the clarity you get from that.”