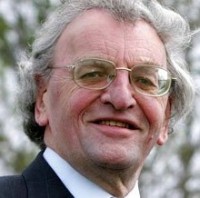 A former news editor has written his final column for a regional daily after 55 years in the industry.

Mike Amos, pictured, has said farewell to the Northern Echo, for which he has written the Backtrack column for 34 years.

Backtrack, for which Mike won multiple awards, told the stories of those involved in grassroots sport across the North-East of England.

His final column was published on Saturday 7 December.

In it, Mike wrote: “No more questions and, goodness knows, no answers.

“After 34 multiple-award winning years among sport’s grass roots – bi-weekly from 1985-2011, weekly in semi-retirement thereafter – this is the final Backtrack column and my swansong after almost 55 years, all with the same company, in what folk once called the inky trade.

“There’ve been countless millions of words and these are the last. Backtrack has become a cohesive and a collaborative community and I’ve loved it.

“None of it would have been possible without a gracious and generous army of readers, correspondents, contributors and colleagues, many now departed. To them my gratitude is unending.”

Former Echo editor Peter Barron paid tribute to Mike, who was news editor when he began on the Darlington-based daily in 1984, in his regular column.

Peter wrote: “As his editor for nigh on 20 years, he was impossible to manage and, in truth, I didn’t even try. Freedom to roam, and forgetting team tactics, is the key to getting the best out the most creative.

“There are lessons to be learned from Mike for any young journalist beginning their career in an industry going through huge challenges and mind-boggling change.

“Wherever the technology takes us, the ability to write well, and to lift readers’ spirits through the choice of words, will always be fundamental.

“And what Mike demonstrated better than anyone else was the value of getting off your backside, getting out into communities, and talking to people. That’s where the best stories, and an understanding of the audience, really comes from and it is an art that must not be lost.”

He added: “Mike was never an editor and perhaps, at one time, that may have been a personal regret. However, no editor in The Northern Echo’s 150-year history – from William Stead to Sir Harold Evans and beyond – left a more profound mark on The Great Daily of the North than Mike Amos.”