A former regional journalist who moved into PR has returned to journalism with the launch of his own business news website.

Ex-Bournemouth Echo business editor Andrew Diprose, pictured below, has launched Dorset Biz News, which he says will fill a “big yawning gap” for coverage in the county.

Andrew was the Echo’s business editor from 1991 to 1995 before later joining his old editor, Gareth Weekes, at PR company Deep South Media.

The site’s four-figure start-up costs were self-funded and the shareholders in his limited company, Dorset Biz News Ltd, are himself, his wife and his son. 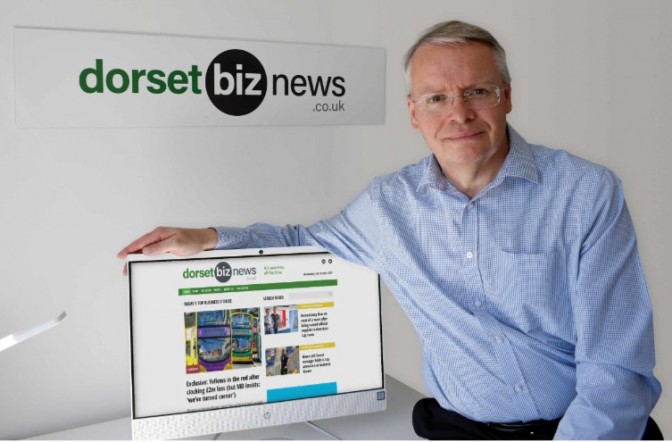 Andrew, 58, said: “We have no external shareholders or interested parties and are committed to providing free, impartial and trusted business journalism.”

He added: “We’re a content led business news website aimed at founders, entrepreneurs, CEOs, MDs and directors – particularly in the professional sector (finance/law) – who feel they are not being served by current media outlets.

“Interestingly I had requests from two firms in the legal and accountancy sectors within hours of launching the site for my ad rate card.

“We’ll see if that turns into hard bookings from 1 November but content really is king. Advertising will only follow, in my opinion, if the business journalism on the site is good.”

The site has been in development since May and went live for the first time last week.

In an introductory article on Dorset Biz News, Andrew wrote: “It’s 24 years since I wrote my last story as Business Editor of the Bournemouth Daily Echo. The intervening years saw me move to the so-called ‘dark side’ – public relations – the first of many journalists to take that path.

“But now I’m back where I will always feel most comfortable – as a business reporter and running my own company to boot – and, boy, does it feel good.

“With 20 separate news categories, plus People and Biz Extra sections, it won’t be long before we become the place to go for all things business.

“It’s amazing to think that in a county of more than 56,000 registered companies, it’s taken until 2019 for Dorset to have its own dedicated business news website. Well, that’s changed for ever now.”

Prior to his current role, Andrew was a director of Deep South Media Ltd, the Bournemouth-based PR and design agency created by his former editor, Gareth Weekes, in 1998.

He joined the company in 2005 to start the PR division, which now employs eight former journalists, including seven previously with Newsquest.

Andrew, who is also a former head of news at Chiltern Radio, said the initial response to his new venture had been “quite overwhelming”.

He added: “I was particularly pleased to receive a message from Peter Sands, the former Northern Echo editor, who has redesigned more than 90 newspapers and magazines and is highly respected in the industry.

“He said about www.dorsetbiznews.co.uk: ‘The website looks very smart – accessible and nice readable typography.’ Praise indeed from such a highly regarded journalist.”