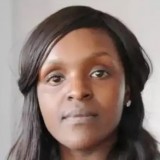 An editor who called for an MP to resign after she was convicted of perverting the course of justice has defended his decision to continue publishing columns written by her in his newspaper.

Peterborough Telegraph editor Mark Edwards says it would be “wrong” to “censor” the views of the city’s sitting MP Fiona Onasanya, left, who was convicted of the offence last month and is currently awaiting sentencing.

After her conviction, Mark had called for Ms Onasanya to resign in a column for the Telegraph, saying she was “no longer fit to represent the people of Peterborough”.

But the newspaper also published a column by the MP, who has been suspended by Labour, in which she indicated she would “continue” as the city’s representative, although she did not mention her conviction in the piece.

In an editor’s note published alongside the MP’s column, Mark wrote: “We have been asked why the PT is publishing Fiona Onasanya’s columns following her conviction at the Old Bailey.

“The PT offers columns to the two sitting MPs covering Peterborough if they choose to submit one. While she is still the MP – and therefore the elected representative – we believe it would be wrong to deny our readers the chance to read what she has submitted.

“To censor the column would, in my view, be wrong, and in my experience our readers are quite capable of making their own minds up about the columns submitted by local politicians.

“The column will of course remain subject to our normal legal and Editor’s Code of Conduct boundaries.”

Ms Onasanya, 35, was convicted at the Old Bailey after she was found to have lied to police about who was behind the wheel of a car which was caught speeding.

In his column calling on the MP to step down, originally published on 20 December, Mark wrote: “When we first became aware of the details of the case we at the PT were somewhat incredulous. It did not seem likely that an intelligent, legally qualified, highly driven individual like Fiona Onasanya would allow herself to end up in a situation where she went on trial for conspiring to avoid three points on her licence – a clean licence at that.

“How could she possibly risk her personal reputation, her political and her legal careers like that? For the sake of three points and a modest fine? It beggared belief then and it still does today.”

He added: “Fiona Onasanya will now have to wait for the court’s sentence – she has been warned that all options are possible. That doesn’t mean that legally she can never be an MP again, it may not even mean that she has to resign as an MP now. But she should.

“She is no longer fit to represent the people of Peterborough. Not simply because she has been found guilty of perverting the course of justice and her integrity has been shattered, but because the errors of judgement she has shown throughout this sorry affair have been colossal.

“Her judgement can’t be trusted. The city deserves better and the city needs better. She must resign now.”