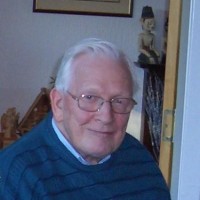 An editor who ran a regional daily for 17 years and led the newspaper through “difficult times” has died aged 88 following a cancer battle.

Tributes have been paid to Ken Griffin, left, who spent almost 35 years with the South Wales Argus, editing the paper between 1970 and 1987.

During his tenure at the Argus, Ken oversaw technological changes at the Newport-based title and was involved in the move from its traditional offices to purpose-built premises.

His successor Steve Hoselitz, who served as Argus editor from 1987 to 1994, was among those to pay tribute.

Steve told his old paper: “Ken Griffin came to the editor’s chair when his predecessor, Ken Loveland, left. He was a thoughtful journalist and in charge of the paper through some difficult times.

“He steered the Argus through the first wave of technology changes as the old ‘hot-metal’ production gave way to early computers. And it was during his stewardship that the paper moved from its traditional offices next to Newport’s market in High Street and out to purpose-built premises at Maesglas.

“The paper also changed hands for the first time in almost 100 years, when the family company owners sold it to the Daily Express group. Then sister weekly papers were brought in house, with a combined editorial team.

“I was lucky to work as his deputy for he gave me the room to develop. He was a devoted father and husband. I am sad to learn of his death.”

Ken gave current Argus deputy head of content Carl Dufford his first job in journalism, taking him on as a trainee reporter in the early 1980s.

Said Carl: “He warned me that I’d be out on my ear if I didn’t pass my shorthand exam, but I’m grateful that he did, because it forced me to knuckle down and focus.

“He was respected both within the Argus and in the community outside and I was saddened to hear of his death. My condolences go to his family.”

Ken also worked at the Daily Herald and Aberdare Leader before joining the Argus as a reporter in 1953, later serving as assistant to the editor and assistant editor before taking on the top job.

He died last month at Springfields Nursing Home, in Colchester, and his funeral took place at Colchester Crematorium.

His son Simon told the Argus: “Family was always the most important thing to him. He always put us first. He was willing to do anything for both my mum and myself.

“He was an inspiration as a father, leading by example in a quiet but firm way. In later years, he became known for his humorous quips and cheery disposition, always positive in outlook, never complaining despite dealing with the onset of his cancer. Dad will be missed by all who knew him.”