A regional daily editor has hit out at a national news website which failed to credit one of her journalists.

Mr Stansfeld admitted using his professional email account to warn a man of police action in a bid to try to help a billionaire’s ex-wife find his missing millions.

But, after the exclusive was published on yesterday’s front page, pictured, the story was followed up by Mail Online without giving credit to Fran, although the site did later add an attribution to the Oxford Mail. 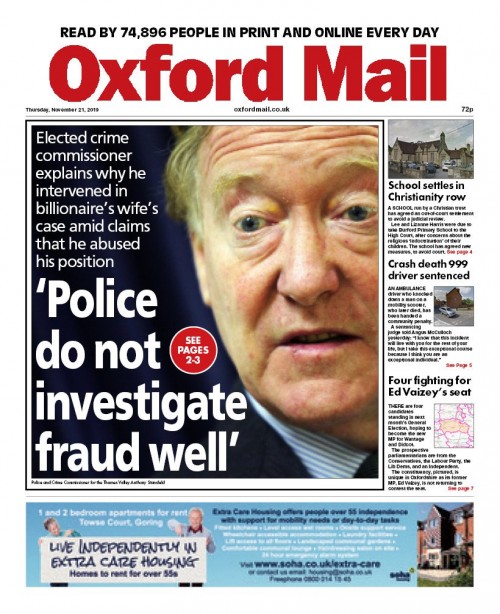 The episode prompted Samantha to criticise the national site on Twitter, saying Fran had been “completely mugged off” after it failed to acknowledge the source of its quotes.

Samantha told HTFP: “I don’t think people realise just how much of the content they see on nationals comes from the local press.

“If we have a good story, we can almost guarantee it’s on a national homepage by lunchtime. And that’s fine – when they credit us. If they acknowledged the hard work and hours that a young reporter spent getting that story right. If they linked back to our story.

“I think this is part of a wider issue in terms of public education as to what local press actually does, and how vital we are to democracy. The rebuff I had from a couple of people on Twitter was ‘well it gets syndicated by an agency, so you don’t need acknowledgement’.

“If people don’t realise the value of, or invest in, the source of the stories, i.e. local newspapers, what do you think happens? No more stories from that local news source – agencies have less content to sell to nationals – nationals struggle.  And more importantly, the public misses out on open democracy. Local news services are absolutely vital in holding power to account.

“Secondly, not every story is syndicated through agencies. We’ve had dozens of examples of nationals taking what they like without going through the agency. That’s stealing. There are some ‘agencies’ and news publications which are renowned for it.

“Obviously we want our stories to be read and for them to have the impact they deserve. The only thing the local press is asking for is a little acknowledgement. We’re a very important part of the industry and we need support.”

Samantha said that one national title had even rung her up for help after being hit with an IPSO complaint for a story it had lifted from the paper.

“We recently had a national publication rip off a court story of ours [and] embellish with details not said in court, or in our report,” she said.

“Then, when they got an IPSO complaint, they called me and asked me to help them with their defence. They couldn’t understand why I was peeved they’d ripped off our work, then had the audacity to call me and ask for a favour?

I wish readers would wake up a realise how much of what they see in the nationals is taken from local newspapers. And invest in local press.

This story took Fran WEEKS to get right. She did a fantastic bloody job. Then she gets completely mugged off by the Daily Mail ???