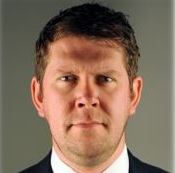 A regional daily editor says he will have to put up a paywall on its website because he does not think there is an “alternative” option.

James Mitchinson, left, has stated his belief that the Yorkshire Post will have to ask readers of its website to contribute financially.

James made the remarks in an interview with the Financial Times about the work of the Leeds-based Post, which averages more than 60,000 daily unique users online according to figures published in February.

Post owner JPIMedia has introduced paywalls, either on a permanent or trial basis, at titles including Sheffield daily The Star, Blackpool daily The Gazette and Portsmouth daily The News in recent months.

In May, James himself launched a consultation with readers over what would make them “be prepared to back our journalism with your own hard-earned money”.

The Post introduced online registration for readers last year in a move designed to prevent the use of ad-blocking software, with James justifying the move on the grounds that the paper’s “high quality journalism” needed to be paid for.

He told the FT: “We will have to ask readers to contribute financially. I do not think there is an alternative.”

Speaking to HTFP, he added: “I honestly believe good journalism undertaken for the betterment of a given place and people is worth paying for.”

Audience measurement company PAMCo recognised the YP earlier this year as the most trusted newspaper in the country.

The paywall model implemented at The Gazette and the News allows readers to access five free articles a week before being asked to subscribe, with a £2 a week subscription offering them unlimited access to articles.

The FT also reported JPIMedia editorial director Jeremy Clifford as saying the model had been “well received by our readers”, adding the company was planning on introducing paywalls to other titles in the coming months.

However the company, which is currently up for sale, declined to reveal which titles are being considered when approached by HTFP.