An editor has denied claims in a BBC report that a reader recently complained about a story his newspaper ran 107 years ago.

The BBC reported earlier this month that a Teesdale Mercury reader filed the complaint about the weekly’s coverage of the death of a 16-year-old parlour maid Dorothy Balchin in a 1912 edition.

A report into Ms Balchin’s inquest had called her suicide notes “pathetic”, with an inquest jury finding her “temporarily insane”.

But while agreeing that the 107-year-old story had been “an awful way to report the death of a young woman,” he denied that it had been the subject of a “complaint.” 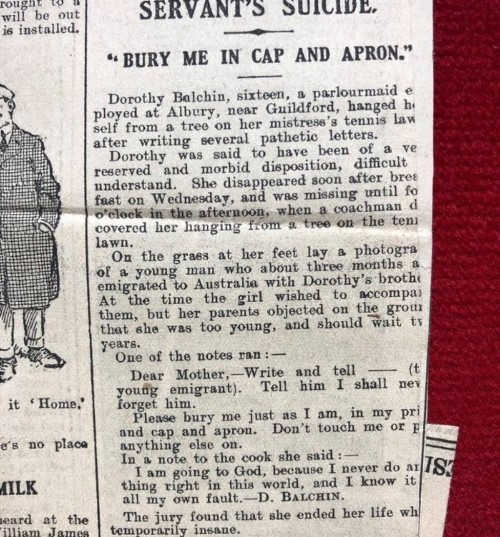 Speaking about the BBC’s story, Trevor told HTFP: “What was an amicable and thoughtful exchange between a newspaper and a reader about the 1912 cutting (and whether historical apologies should be given) has unfortunately been turned into something it is not.

“At no time did I consider it to be a complaint and I know the alleged complainant feels exactly the same. But mix-ups happen. Even at the BBC.”

Of the story itself, Trevor said: “We agree that this is an awful way to report a tragic death of a young woman. [But] we must be careful not to judge the past with today’s morals but instead learn from what happened.

“We should be thankful attitudes have changed, and mental health, depression and suicide get the attention they so thoroughly deserve, and there are strict guidelines issued to modern media.”

The report detailed how Ms Balchin had died on her employer’s tennis lawn at Albury near Guildford, Surrey.

Part of a syndicated section of the Barnard Castle-based Mercury, it included details of suicide notes she had written which the report called “pathetic”.

Trevor added: “Pathetic is the adjective of pathos meaning emotion and it was once used very differently to how it is used today.”