Editor speaks out over bid to hire female football writer

An editor who advertised for a chief football writer saying he wanted a woman to get the job has defended the move.

Yorkshire Post editor James Mitchinson tweeted that he wanted a woman to take over as his paper’s Leeds United reporter when he advertised the role earlier this year.

Although the job eventually went to a man, Stuart Rayner, James defended the move in a panel discussion at the Society of Editors conference in London. 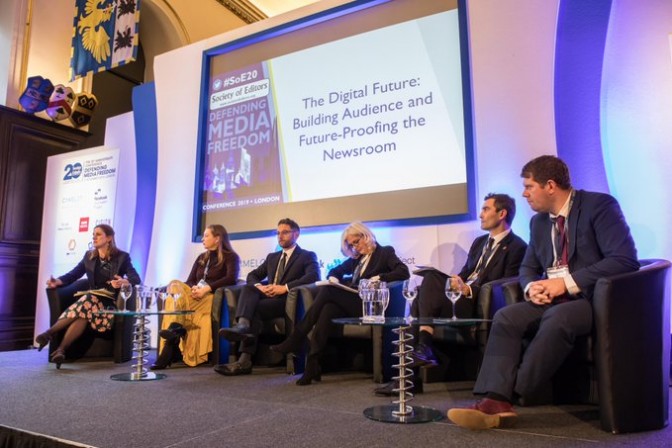 James Mitchinson, on the right, takes part in the panel discussion on ‘Building Audience’ at the SoE conference

James told the conference: “We had previously advertised for a chief football writer for Leeds United in our centre.

“We received about 60 applications from the advert which went on Press Gazette and HoldtheFrontPage, but there was not a single application from a woman.

“A few days later that bloody The Athletic pinched my other football writer – this time for the Yorkshire Post rather than the YEP.

“I added a very carefully crafted tweet to get some attention and I am pleased to say we got a number of applications from women who wanted to do the job.”

James conceded that the task of improving gender diversity on sports desks “is going to take time” – partly owing to the “lack of churn” in local sports journalism.

“Until The Athletic came in and disrupted our world there was very little churn on the sports desks,” he told the conference.

“Quite often you find individuals on sports desks who are doing their hobby and getting paid for it, they are brilliant writers, incredibly passionate about what they do and with a huge amount of knowledge.

“One of the things we need is role models – to do a better job putting female sports writers at the forefront of what we do, but it’s hardly a quick fix and it’s going to take time.”

Earlier James told the gathering that the ‘Power up the North’ campaign which has seen rival publishers come together to call for more government help for the region wouldn’t have been possible 10 years ago.

“The power up the North campaign has received genuine traction but it wouldn’t have been possible ten years ago,” he said.