An editor found himself reporting on floods which struck his own home and claimed the life of his family’s guinea pig.

Joe Willis runs hyperlocal website Richmondshire Today and a monthly free magazine from his home in Leyburn, North Yorkshire, which was hit by more than 100mm of rain in one hour.

Joe was out delivering the magazine on Tuesday when he received a “panicked call” to say water was seeping into the house.

The home saved from flooding due to the quick actions of his teenage stepson and his young brother, who diverted water away when it started to come into the property. 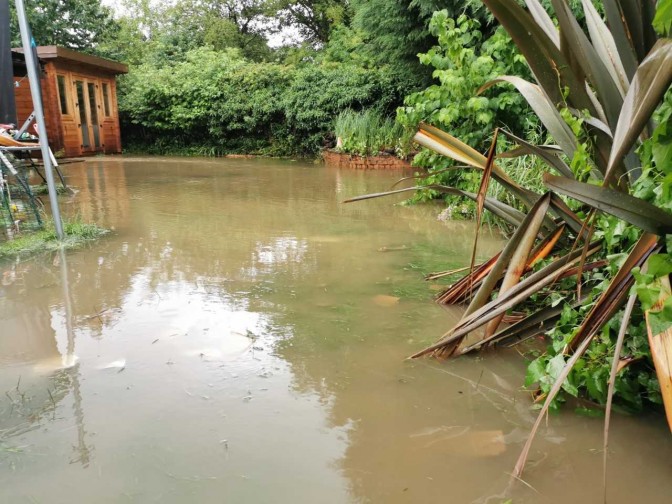 The scene in Joe’s garden after the flood

Joe told HTFP: “We were out delivering our monthly magazine to stockists and advertisers when the heavens open. We’re used to adverse weather living in the Pennines but the ferocity of the rain was like nothing I’ve ever seen before.

“Within ten minutes we got a panicked call from home to say water was starting to come through the front door.

“The kids had the good sense to use Ikea boxes to divert the water away from the house, but water still flowed through the sheds, damaging electrical items, toys and books.

“Sadly, the Guinea pig in the garden succumbed to the water which was two foot deep and threatening to come in the back door by the time we got home.”

After digging a small trench which allowed water to flow out of the garden, Joe, previously social media editor at the Northern Echo, turned his attention to the developing story while also cleaning up the mess in his own home.

He added: “There were so much damage, so many sad stories and tales of rescues and near-things that it was difficult to do the incident justice, but I tried to use local knowledge and contacts to make up for a shortage of manpower.

“A freelance photographer we work with, Guy Carpenter, had gone out to get some shots of the thunderstorm and had got trapped right in one of the villages worst affected.

“The images he sent over later that day were superb, also making many of the national papers. Our website quickly became one of the go-to places to get updated information on what was happening and what help was need, so I worked hard to get as much detailed information online as quickly as possible.

“In the first few days after the flooding, the volunteers were critical of the response of the local authorities, and I was able to use our website, social media pages and the contacts of those in power to get things moving quicker. We also helped to get the police to refund £150 charges that motorists faced after they became stranded and their vehicles were towed away.”

The web stats for Richmondshire Today hit record levels due to the flooding.

Joe said: “We normally get two or three thousand unique users a day on the site, but we got more than 50,000 over the first three days after the floods.”

He added: “The local economy relies on tourism and local businesses are very keen to get the message out that this area of the Yorkshire Dales is still open and visitors are welcome.

“We’ve been able to help with that message and will continue to highlight the staggering generosity of those who have donated time, money and much-needed supplies, and the remarkable community spirit which is ensuring the area is back on its feet as quickly as possible.”