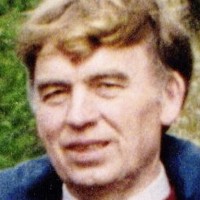 A regional journalist who won the MBE for services to the industry has died aged 76.

Tributes have been paid to Hal Crowe, left, who has been described by a former colleague as “a natural journalist”.

Hal worked for the Belfast Telegraph and Morton Newspapers before being appointed editor of Farm Week in his early 20s.

He was the second editor of the publication, which was launched in 1961, and spent four decades at the helm of the agriculture based newspaper until his retirement in 2007.

Hal, who was awarded an MBE for services to journalism in 1991, continued to write weekly columns for Farm Week, which is now owned by The Irish News, after his retirement.

Farm Week editor Robert Irwin, who worked alongside Hal for more than 20 years, said he was “a natural journalist”.

Robert told the Irish News: “His ability as a writer was outstanding and he was never happier than when he was banging out a story on a typewriter or later on the keyboard of a word processor.

“He steered FarmWeek through major changes in technology both in the publication’s Portadown office and the production systems he oversaw at the Morton Newspapers headquarters in Lurgan and latterly Portadown.

“While he helped launch the careers of a number of notable journalists, Hal evoked tremendous loyalty in his team with many staying at his side for decades.”

“Often to be found at his desk in the evenings and at weekends, he would be accompanied ‘out of hours’ by one of his faithful dogs, or arrive in the office fresh from tinkering at his boat on the River Bann, speckled with engine oil, but with an idea in his head for an opinion piece or a news story.

“Even after his retirement Hal was a constant encouragement to myself and other FarmWeek team members and his passing is a sad loss to agricultural journalism.”

Hal died last Friday, and his funeral was held at Epworth Methodist Church, in Portadown, on Monday.