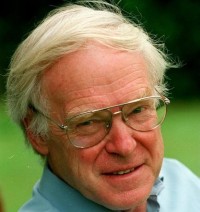 A journalist has blamed the “economic climate” after ending a regional daily column he believes was the longest-running in British journalism.

Harry Mead’s final column for the Northern Echo appeared yesterday, nine days short of 50 years after it first appeared in the Darlington-based daily.

Harry, pictured, has written the column for 53 years in total, with the weekly piece first appearing in the Teesside Evening Gazette in 1966.

He began his career in 1956 and was first given the column in the Middlesbrough-based Gazette at the age of 28, with it transferring to the Echo from 22 March 1969.

In his farewell column for the Echo, Harry wrote: “I have been writing my weekly column since 1966, and it first appeared in The Northern Echo 50 years ago this month.

“But today’s column is the last. Time, and an economic climate ever less favourable to newspapers in the digital age, have caught up with it.

“The column’s 53-year span might be the longest in British journalism, certainly for a column of topical comment. But my sole aim, week by week, has been to find something worthwhile to say – and to say it, or maybe several things, well enough to take the reader, perhaps yourself, from start to finish.

“On the second count I will have failed many times. The first is purely subjective, and even where I’ve struck a common chord I’m sure I’ve tested many a reader’s patience by repeating myself more than once.”

Harry’s column has been overseen by nine different editors over the years at both the Gazette and the Echo, and he added he hoped he had “respected the huge privilege of being entrusted with a newspaper column”.

He added: “Newspapers are – still – its best-ever public platform. And my greatest wish as I depart is that whatever, or whoever, fills this space, it is possible that a future Northern Echo columnist might one day be looking back on half a century of contributions. But for now, good luck to you all.”

The final column was accompanied in the Echo by an interview of Harry with its chief features writer Chris Lloyd.

Wrote Chris: “After 50 years of railing against injustice and promoting beauty, the columnist’s passion is undimmed, although he’ll no longer be venting it on a weekly basis. Let’s hope the power of his pen will continue to be reverberate throughout these pages in the future.”

Echo editor Hannah Chapman told HTFP: “Harry’s columns were always beautifully written, reflecting his passion for the landscape and people of our patch.

“Long before I worked for the Northern Echo he won huge respect in my own community for his vehement opposition to a line of giant pylons eventually built across my family farm.

“Although his weekly contribution has come to an end, Harry’s association with the Echo will continue through his less regular but equally brilliant features on a variety of local topics.”