A cousin of the Queen  has urged a weekly newspaper to “keep the MPs and the local authorities nervous” as the title held a royal celebration to mark its 150th anniversary.

The West Sussex County Times welcomed the Duke of Gloucester to Horsham Museum, where he toured an exhibition about the paper’s history.

The Duke, who is a paternal cousin of the Queen, was presented with a commemorative front page marking his visit by County Times editor Gary Shipton.

He also met the paper’s former deputy editor Tim Hopewell-Ash and digital editor Steve Payne, who both retired this spring after a combined journalistic service of nearly 90 years. 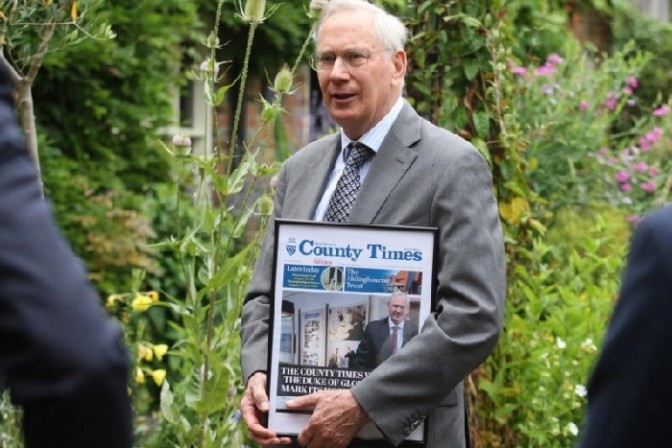 The Duke, pictured, told the County Times: “I’m delighted to play a tiny part in your history and wish you every luck and that you continue to keep notes of what is going on.

“Keep the MPs and the local authorities nervous.”

Said Gary: “The Duke showed genuine interest in the role of the newspaper and its digital transformation and had clearly done some considerable research of his own.

“His knowledge of the County Times and our industry impressed everyone he met.”