Donor found for girl regional daily campaigned to save

A stem cell donor has been found for a little girl whose plight prompted a regional daily campaign to save her life.

The Sunderland Echo is celebrating after the donor was found for nine-year-old Chloe Gray, who was born with a rare bone marrow failure disorder.

Last year the Echo launched a campaign to help Chloe, and more than 1,500 people have signed up to the bone marrow donor register as a result.

The Echo splashed on the news on Thursday. 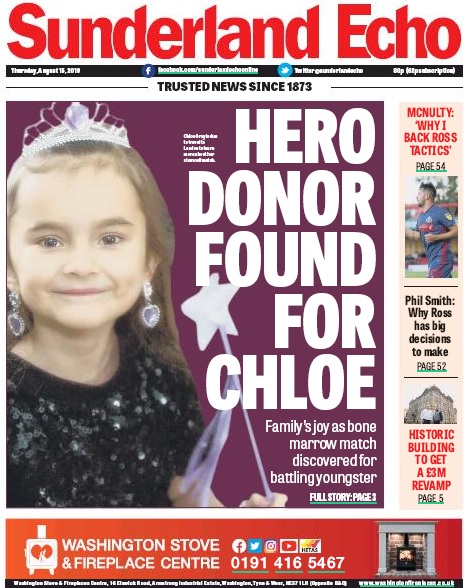 Her mum Francesca Bowser, 28, told the newspaper the previous day: “We found out a month or so ago when we got a call from the transplant team at the Royal Victoria Infirmary in Newcastle, who said that they have found a 9/10 match.

“The match is from someone in the UK but we won’t get to find out who they are until years after and even then it is up to them if they want us to find out.

“It’s surreal to finally find a match as we were close to thinking it was never going to happen.”